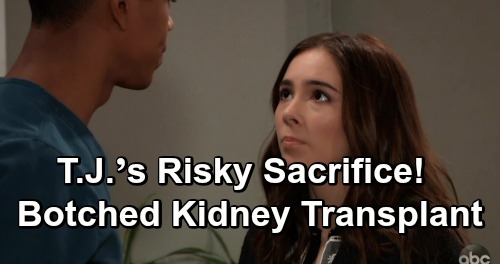 General Hospital (GH) spoilers tease that T.J. Ashford (Tajh Bellow) will want to help if he can. Jordan Ashford (Briana Nicole Henry) needs a kidney transplant, so Curtis Ashford (Donnell Turner) plans to get tested along with T.J. Curtis knows Jordan wouldn’t want T.J. giving up a kidney for her, but he also knows there’ll be no stopping him. If T.J. can save Jordan’s life, he’ll gladly put his own on the line.

It sounds like the teen road trip could bring an accident, so it’s also possible Trina (Sydney Mikayla) will be the matching donor. Oscar Nero (Garren Stitt) is another option if GH wants to take it in that direction. Cancer patients aren’t typically good donor candidates, but there are exceptions – especially in the world of soaps.

However, several General Hospital spoilers point to T.J. being a match and going under the knife. During the week of March 11-15, Molly Lansing-Davis (Haley Pullos) will be filled with fear. Jason Morgan (Steve Burton) will eventually try to soothe her concerns. He’ll want Molly to trust that everything will work out, so perhaps she’ll herself awaiting news on T.J.’s surgery.

Will something go wrong while T.J.’s on the operating table? General Hospital’s had plenty of death and destruction lately. We also know Oscar will indeed die eventually according to a reliable GH insider. All of that could mean GH won’t add to the doom and gloom by killing T.J. off.

Then again, it’s worth mentioning that Bellow may not be quite right for the part. He’s a perfectly fine actor, but he looks a lot older than the previous T.J. – despite the fact that he’s actually younger! People who loved Tequan Richmond as T.J. may or may not be feeling Bellow’s portrayal. Since Pullos looks young for her age, the T.J. and Molly pairing is now a bit jarring.

Of course, a simple solution would be to break them up, but General Hospital could take another route by getting rid of T.J. entirely. If Curtis lets him make the ultimate sacrifice for Jordan, that could cause serious issues in their marriage. Can you imagine Jordan waking up to find that her son died to save her? That would bring major drama.