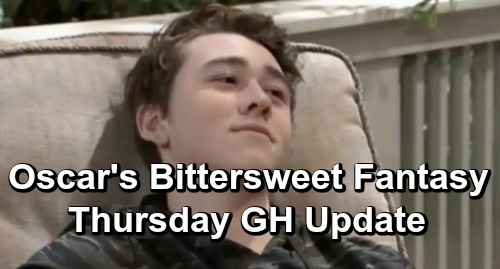 General Hospital (GH) spoilers for Thursday, April 25, tease that Elizabeth Baldwin (Rebecca Herbst) will try to have hope for the future. She’ll tell Cameron Webber (William Lipton) that they have to find a way through the drama, but he won’t look confident. Cam’s been sparring with Franco Baldwin (Roger Howarth) lately and they’re all dealing with poor Aiden Webber’s (Jason David) problems.

Nevertheless, Liz will do her best to remain optimistic. She’ll want things to calm down for the “Friz” fam, so maybe she’ll get her wish eventually. Over at the Quartermaine mansion, Josslyn Jacks (Eden McCoy) will join Oscar Nero (Garren Stitt) outside. He’ll look weak, but he’ll still manage to smile over her Nurses Ball enthusiasm. Joss will pretend Oscar’s going to make it to their big performance.

GH fans know Oscar’s fading fast, so getting up on stage weeks from now is out of the question. Even so, Oscar will enjoy fantasizing about it briefly. Later, Josslyn will rip into Cameron. He may not handle Oscar’s imminent death appropriately, but she’ll set him straight. Of course, the true source of Josslyn’s rage will be helplessness. She can’t fix Oscar, so she’ll unload on Cam out of frustration.

Other General Hospital spoilers say Dr. Kevin Collins (Jon Lindstrom) will reassure Laura Webber (Genie Francis). She’ll wonder if he’s having any doubts about pretending to love Ava Jerome (Maura West), but Kevin won’t be. He may not like the plan, but he gets that it’ll prey on Ryan Chamberlain’s (Jon Lindstrom) jealousy. It really is the ideal strategy to draw Ryan out into the open.

Ava will have a spring in her step as she approaches Felicia Scorpio (Kristina Wagner). She’ll let Felicia know that they’ve got the green light on the scheme, so it should kick off ASAP. Unfortunately, Mac Scorpio (John J. York) will be furious on Thursday. He might be left clueless and assume Kevin’s found another way to hurt Laura. Then again, Mac may hear the plan and think it’s a terrible one!

Meanwhile, Lulu Falconeri (Emme Rylan) will arrive back in Port Charles. She’ll immediately come to someone’s aid, so that could be Laura if she’s faking a broken heart. It could also involve pitching in on the plot if Lulu’s brought up to speed. There’s even a chance Lulu will help Maxie Jones (Kirsten Storms) and Peter August (Wes Ramsey) with some plans of their own.

Peter and Maxie are still suspicious of Liesl Obrecht’s (Kathleen Gati) leverage, so they could use a super snooper like Lulu on their side. Regardless, Lulu will catch Peter off guard later this week. Until then, Carly Corinthos (Laura Wright) will have an OB-GYN appointment at GH. She’ll fear her baby will inherit something serious, so she’ll grill the doc with Bobbie Spencer (Jacklyn Zeman) right next to her.