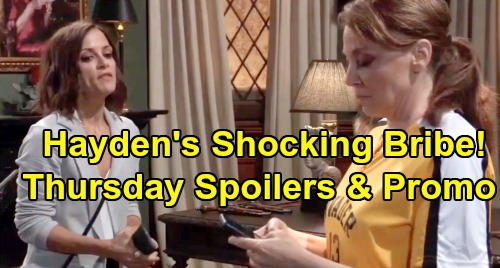 However, Hayden probably won’t trust Liesl enough to provide the full scoop. It looks like Liesl will get out her phone and start dialing Valentin’s number – or at least Nina Reeves’ (Cynthia Watros) number. The cops would certainly work here, too. Any of these options would bring Valentin in the loop on Hayden’s digging.

General Hospital spoilers say Hayden will try to make a deal with Liesl. She’ll propose offering Liesl something in exchange for her silence. Liesl will obviously want to hear the details first, but she’ll definitely be interested in gaining another advantage. She’s the type of gal who always wants the upper hand!

At GH, Hamilton Finn (Michael Easton) will grow suspicious of Valentin. He’ll think Valentin’s a bit too interested in Cassandra Pierce (Jessica Tuck), so he’ll wonder what the cagey Cassadine is hiding. General Hospital spoilers say Finn and Valentin will end up clashing, but the most important thing is to focus on finding a cure for Sasha Gilmore (Sofia Mattsson). Finn will definitely keep working on that.

Over with Lucas Jones (Ryan Carnes), he’ll fill Brad Cooper (Parry Shen) in on Julian Jerome’s (William deVry) decision. Brad will look dismayed as Lucas explains Julian and Kim Nero (Tamara Braun) are leaving Port Charles. Lucas suggested he’d miss Julian, but he isn’t standing in the way. He had some concerns since Kim was willing to leave without Julian, but he just wants what’s best for both of them.

Brad, on the other hand, will insist Julian can’t move. He’s bonded with Julian since they’ve been allies in this baby swap saga. Brad will also worry about Lucas not having his dad around and “Wiley Cooper-Jones” not having his grandpa. He’ll do what he can to prompt a change of heart, but that may not be necessary thanks to what’s going on with Kim.

Back at GH, Kim will push Franco Baldwin (Roger Howarth) away after that steamy kiss. Drew Cain (Billy Miller) and Elizabeth Baldwin (Rebecca Herbst) happened to catch them locking lips, so they’ll be tasked with bringing Kim up to speed. Kim will be overwhelmed as she learns Franco has Drew’s memories. She’ll have questions she wants answered, so sticking around is a good idea – at least for a while.

Other General Hospital spoilers say Robert Scorpio (Tristan Rogers) will reveal Franco’s tricky dilemma to Jason Morgan (Steve Burton) and Sam McCall (Kelly Monaco). They just found out Franco was a memory-mapping victim, but Robert will explain a bit more. He’ll note that Franco can live within Drew’s memories or risk a vegetative state. It’s a rotten situation for Franco and all his loved ones.

At The Floating Rib, Franco will grow frustrated. He’ll drink at the bar before ultimately hurling his glass and shattering it. Someone will call Franco’s name nearby, but we’ll see if Franco’s willing to talk. He feels like he’s Drew, so he may not be too interested in anything from his new life right now.