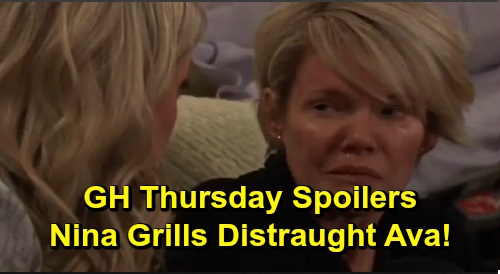 General Hospital (GH) spoilers for Thursday, December 5, tease that Brad Cooper (Parry Shen) will feel responsible for what happened to Lucas Jones (Ryan Carnes). Lucas is currently in a medically induced coma at GH, so Brad will beat himself up over the accident that led to it. He doesn’t know about Julian Jerome (William deVry) cutting the brakes, but he does know Lucas applied them and couldn’t get the car to stop.

Even so, Brad may feel like dropping the “Wiley Cooper-Jones” bomb (Erik and Theo Olson) broke Lucas’ concentration. He can’t share that part, but it’s certainly something he could be wrestling with. However, Brad may tell Sonny Corinthos (Maurice Benard) that Lucas came home from work early to hash things out. He might feel like if he hadn’t been keeping secrets, Lucas wouldn’t have been scheduled to work in the first place. They might’ve already been at Carly Corinthos’ (Laura Wright) Thanksgiving dinner and been able to avoid this accident entirely.

Of course, Julian was on a mission to murder Brad – and we all know that was a disastrous plan. It’s common for spouses to drive each other’s cars, so this was a bad idea from the get-go. Julian didn’t expect Lucas to get behind the wheel, but he shouldn’t have taken such a huge risk like this.

Nevertheless, what’s done is done. Carly will end up calling in reinforcements soon enough! She’ll seek out a specialist to help Lucas, which will most likely be Dr. Griffin Munro (Matt Cohen) according to GH insiders. Over with Michael Corinthos (Chad Duell), he’ll get updates from Harrison Chase (Josh Swickard). Michael will be taken aback when Chase suggests that someone could’ve done this on purpose. Julian has already been raising some red flags with Chase, so he’d better watch his back!

Next, it seems we’ll FINALLY hear the results of Willow Tait’s (Katelyn MacMullen) pregnancy test. At this rate, Willow could’ve had a SORASed baby by now. Good grief! Is she pregnant or not? Despite previous info that pointed to a positive result, General Hospital spoilers now point to a negative one. Reliable sources with the inside scoop insist Willow will tell Sasha Gilmore (Sofia Mattsson) she’s not expecting Chase’s baby. It looks like it was just a false alarm.

At Pentonville, Nelle Benson (Chloe Lanier) will get a new cellmate. Sam McCall (Kelly Monaco) will be the unlucky inmate who’s forced to be Nelle’s roomie. General Hospital spoilers say Nelle will gleefully tell Sam it’s time to catch up. She’ll thoroughly enjoy pushing Sam’s buttons, but the news of Lucas and Brad’s crash could leave them both on edge for very different reasons.

Other General Hospital spoilers say Nina Reeves (Cynthia Watros) will arrive at Shadybrook and attempt to comfort Ava Jerome (Maura West). GH fans know Nikolas Cassadine (Marcus Coloma) was pretty much a total monster during his latest visit with Ava. He made sure he was given special drugs and convinced her that Kiki Jerome (Hayley Erin) was in hell with him. Nikolas insisted that their souls could only rest if Ava made amends and revealed where the portrait was.

Ava cooperated, but the experience obviously left her traumatized. She’ll be a crumpled mess on the floor in Thursday’s episode, so Nina will do her best to help. After Ava suggests that it’s her fault Kiki’s suffering in hell, Nina will shut down the idea. She’ll demand to know who told her that’s where Kiki was.

Nikolas warned Ava to keep their visit between them, but will she confess to Nina anyway? If she does, Nina might think Ava’s just losing it – until she spots the Cassadine ring Nik accidentally left behind. Ava grabbed Nikolas’ hand at one point, and it appears the ring slipped off as he pulled away.

That ring will be under the bed, right next to where Nina will be consoling Ava. Whether Ava confirms the Nik sighting or not, Nina’s probably going to make a shocking discovery! Meanwhile, Jasper “Jax” Jacks (Ingo Rademacher) will be horrified by his secret partner’s continued streak of terrible decisions. He’ll fly into a rage over the attack Nik staged on Hayden Barnes (Rebecca Budig) and wonder how he ever got himself mixed up with someone so reckless.