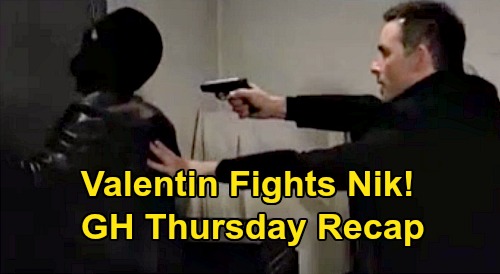 General Hospital (GH) spoilers recap for Thursday, December 5, reveal that Nikolas Cassadine (Marcus Coloma) met with Jasper “Jax” Jacks (Ingo Rademacher) and revealed that he had arranged for Hayden Barnes (Rebecca Budig) to leave Port Charles by staging an “incident” where Hayden was attacked. Jax was horrified and threatened to go to the police and expose everything, but Nikolas revealed that he just found out that Ava Jerome (Maura West) had the portrait stored at her gallery. That seemed to satisfy Jax, and Nikolas took off for the gallery.

Meanwhile, Valentin Cassadine (James Patrick Stuart) and Martin Grey (Michael E. Knight) broke into a storage room at the gallery. Valentin had just cracked a safe in the room when a masked Nikolas came in. Valentin and Martin hid, then Valentin attacked Nikolas and held him at gunpoint, ordering him to take off the mask. Nikolas then fought back and got away, leaving Valentin feeling like there was something very familiar about the masked man.

Unbeknownst to Valentin, Nina Reeves (Cynthia Watros) was at Shadybrook visiting an agitated and still-drugged Ava, who was on the floor sitting by the bed when Nina walked in. Ava went on about ghosts and about Kiki Jerome (Hayley Erin) being in hell with “him.” Nina wanted to know who “he” was, and Ava said Nikolas. After some more back-and-forth, Nina was about to leave, when she found Nikolas’ insignia ring under the bed.

Nina then got the story out of Ava about Nikolas’ ghost being there and asking where the portrait of Helena Cassadine (Constance Towers) was. Nina then put two and two together and told Ava that she didn’t believe that she had seen a ghost, and that Nicholas was likely alive and had been using her to get what he wants. Ava didn’t really understand what was going on, and Nina said that she was getting tired of all the Cassadine men and their lies and mind games.

This is a fascinating development in the portrait storyline, as it now looks like Ava and Nina will team up together to throw a wrench in the current plotting of Nikolas versus Valentin. Of course, at this point Valentin doesn’t know that Nikolas is alive, but that will likely soon change. How are Nikolas and Valentin going to feel when they realize that Nina and Ava are in control of the portrait that holds the key to who will end up with the Cassadine fortune?

Finally, at Pentonville, Sam McCall (Kelly Monaco) was taken to her new cell, where she immediately noticed that Nelle Benson (Chloe Lanier) was her cellmate. They then proceeded to needle each other, with Chloe getting in digs about Shiloh Archer (Coby Ryan McLaughlin) and going on about how she moved on from Michael Corinthos (Chad Duell) and was going to be getting out of prison soon.

Then, Harrison Chase (Josh Swickard) showed up to deliver the bad news to Sam about her brother Lucas Jones’ (Ryan Carnes) accident. He proceeded to say that Brad Cooper (Parry Shen) and Lucas were in an accident, and that Lucas was in a medically induced coma and that they didn’t know if he was going to make it. Nelle immediately perked up and asked about Wiley Cooper-Jones (Theo and Erik Olson) and was relieved to learn he was ok but stunned to hear that Wiley was in Michael’s care.