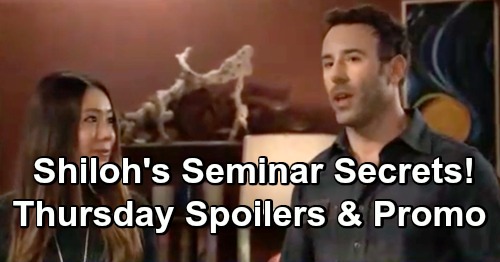 General Hospital (GH) spoilers for Thursday, January 17, tease that Valentin Cassadine (James Patrick Stuart) will turn on the charm again. Just in case Liesl Obrecht (Kathleen Gati) stirred up any doubts for Nina Reeves (Michelle Stafford), Valentin will hope to smooth things over. He’ll address some concern Nina has and insist there’s a way they can fix that.

While Valentin reels Nina back in, Cameron Webber (William Lipton) will meet up with Oscar Nero (Garren Stitt) and Josslyn Jacks (Eden McCoy). He’ll wonder they’re up to, so they’ll explain that they’re planning their future. Of course, Oscar may only have about six weeks left, but that won’t stop him from living his best life with Josslyn. Cam will be glad to see Oscar keeping his spirits up about his ordeal.

Other General Hospital spoilers say Alexis Davis (Nancy Lee Grahn) will summon Scott Baldwin (Kin Shriner), Laura Webber (Genie Francis) and Monica Quartermaine. She’ll hold a meeting regarding Gail Baldwin’s (Susan Brown) last will and testament. There’s something mysterious in this will that needs to be addressed and it could involve some serious changes at GH.

Over with Willow Tait (Katelyn MacMullen), she’ll run into Lulu Falconeri (Emme Rylan) and bring up Charlotte Cassadine (Scarlett Fernandez). Willow will suggest that they need to have another conference about Charlotte’s behavior. She’ll set up a time to meet with both Lulu and Nina about how Charlotte’s acting in class.

Jake Webber (Hudson West) suggested that Charlotte had backed off Aiden Webber (Jason David), but he can’t know for sure. It’s not like he’s in Aiden’s class. Even if Charlotte stopped bullying Aiden, she might be targeting another victim by now. Charlotte is a little brat and Nina is mostly to blame! Willow will hope to set Nina straight at that conference later this week.

In the meantime, Shiloh Archer (Coby Ryan McLaughlin) will welcome everyone to his creepy seminar. He’ll invite the attendees to share a painful memory, so maybe Kristina Corinthos-Davis (Lexi Ainsworth) will chime in. Sam McCall (Kelly Monaco) will look as skeptical as ever once Shiloh’s oozing that eerie fake sincerity again. She’ll face a shocker at this seminar, so it should be interesting to see what’s divulged.

Jason will also bring up Shiloh and offer a warning. He’ll want Drew to stay on guard and hopefully keep his loved ones protected. GH fans won’t want to miss all the Shiloh bombshells ahead. We’ll give you updates as other news comes in. Stick with the ABC soap and don’t forget to check CDL often for the latest General Hospital spoilers, updates and news.