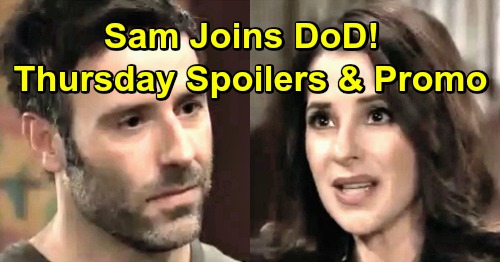 Felicia will be haunted by the past in Thursday’s GH episode. The news about Ryan has stirred up some buried issues for her, so she’ll have a tough time moving on. Of course, Ava Jerome (Maura West) is struggling for a different reason, but she’s struggling nonetheless. Ava knows her involvement with Ryan led to Kiki Jerome’s (Haley Erin) death, so she can’t help but blame herself.

General Hospital spoilers say Ava’s downward spiral will continue, but she’ll get another helpful lecture. Carly Corinthos (Laura Wright) tried to talk some sense into Ava and now it’s Laura Webber’s (Genie Francis) turn. Laura will insist that Ava has to stop thinking about this. She won’t want Ava wallowing in what Ryan did to her and destroying the rest of her life because of it.

Over with Anna Devane (Finola Hughes), she’ll reach out to Dr. Griffin Munro (Matt Cohen). Unfortunately, Griffin will be rather harsh with her. He’ll insist that it would be impossible for them to comfort each other right now. Anna will only have sympathy in her eyes as Griffin gripes. She probably won’t let her push him away, so Griffin will just have to deal with Anna’s pestering.

It seems Griffin’s still trying to cope with Kiki’s demise, but he’ll find an outlet for his rage later this week. In the meantime, Willow Tait (Katelyn MacMullen) will move forward with her plans. Once she found out Shiloh Archer (Coby Ryan McLaughlin) was in PC, she called her landlord almost immediately. Willow wants to break her lease and get out of town as soon as possible.

On Thursday, Willow will catch Nina Reeves (Michelle Stafford) and Valentin Cassadine (James Patrick Stuart) off guard. She’ll sarcastically congratulate them and insist they got their wish. Willow will likely be facing more complaints from Nina, but she may suggest she won’t be Charlotte Cassadine’s (Scarlett Fernandez) teacher any longer. She can pass along her problematic almost stepmom to someone else.

However, you can bet Willow’s exit strategy will fall through. General Hospital spoilers say she’ll be sticking around, so she’ll probably return to her usual position after spring break. Next, Molly Lansing-Davis (Haley Pullos) will take her concerns to Alexis Davis (Nancy Lee Grahn). She’ll argue that Kristina Corinthos-Davis (Lexi Ainsworth) has joined a cult, but her mom may think that’s a little extreme.

Alexis could change her mind after Molly’s persuasive speech, but Sam McCall (Kelly Monaco) will take action regardless. She’s ready to tackle Shiloh head-on, so she’ll head to the community house and ask if she can officially join DoD. Shiloh may be suspicious of the sudden move, but Sam will try to sell the story of why she wants this.

At GH, Alex Devane (Finola Hughes) will demand a phone call after her surgery. An unsatisfied Anna Devane Marick (Finola Hughes) will want to turn Alex over to the WSB, but her sneaky twin will stir up a little more trouble before she goes. General Hospital spoilers say Alex will call Valentin and seek help, but she won’t get any. Instead, Alex will play her last memory drama card and hope Anna suffers for it.

At least Anna can rely on Dr. Finn Hamilton (Michael Easton) as she handles shocking questions about her history and Peter August (Wes Ramsey). We’ll give you updates as other GH details emerge. Stay tuned to the ABC soap and don’t forget to check CDL often for the latest General Hospital spoilers, updates and news