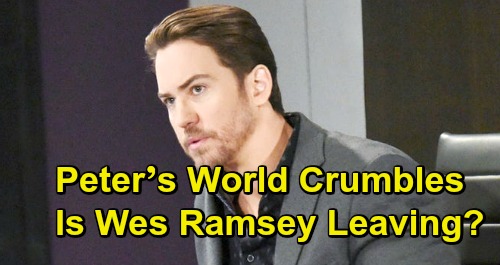 General Hospital (GH) spoilers tease that Peter August’s (Wes Ramsey) future is up in the air. For starters, Anna Devane (Finola Hughes) seems to be on the verge of finding out Peter isn’t her son after all. GH buzz has been pointing to this rewrite for a while now, so it’s no surprise that it’s finally happening. It looks like Alex Devane Marick (Finola Hughes) is Peter’s mom, which changes a lot.

Peter already felt mistreated by Cesar Faison (Anders Hove) and abandoned by Anna. However, he’s gotten to know Anna lately and has formed a bond with her. Once Peter realizes Alex is actually his mother, that’ll open up some new issues.

Alex isn’t exactly the kind of woman Peter would pick out to be his mom. She’ll be in WSB custody soon, but she probably wouldn’t have much to do with Peter even if she were free. After all, Alex was apparently just fine with letting Anna believe she was Peter’s mother. She must’ve not wanted or cared about that responsibility.

Of course, all the mama drama won’t be the only thing that affects Peter. It appears he’s got some competition for Maxie Jones’ (Kirsten Storms) heart. Maxie was quite bubbly when she chatted with Chet Driscoll (Chris Van Etten) the other day. Lulu Falconeri (Emme Rylan) picked up on their chemistry and suggested Chet was flirting. She clearly thinks they’d make a cute couple and so do many GH fans!

It’s possible General Hospital is just including Chet to make this a love triangle. There’s also a chance Chet will simply push Maxie into a real relationship with Peter. She might take herself off the market and go all in.

Still, we can’t help but wonder what Peter’s GH future will look like. If Peter goes into a downward spiral after the Alex revelation, Maxie may lean on Chet. What happens if Peter loses his lifeline? Maxie is a big part of why he’s been able to stay on the right path. Without her, Peter could follow in Faison’s dangerous footsteps. He might head down a dark road once again.