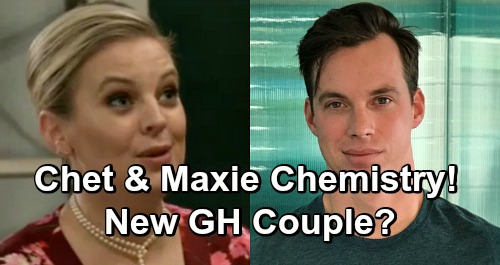 General Hospital (GH) spoilers tease that Chet Driscoll (Chris Van Etten) may be on the verge of more airtime. He recently had a chat with Maxie West (Kirsten Storms) during all the Christmas festivities. GH fans thought it might’ve been a random popup, but now it seems it was a way bring Chet back on canvas.

Chet appeared again at the boxing gym on Thursday and told Sonny Corinthos (Maurice Benard) he was looking for a job in town. Sonny gave him a job managing it, which Maxie wasn’t thrilled about. She showed concern for Chet as their friendship continued to develop.

Now that Chet’s apparently sticking around, we have to wonder what the future holds for him. Many General Hospital viewers see some strong chemistry between Maxie and Chet. There are certainly plenty of people who like Maxie with Peter August (Wes Ramsey), but there are others who wish Peter would drop off the face of the planet. It’s all about your personal character preferences!

Chet and Maxie’s latest interaction has sparked more support for them as a pairing. Twitter users were quick to pipe up about the solid vibe they had going on. “I really like Chet,” gushed one fan. “He and Maxie have really good chemistry and he is actually her type and age group.” Another GH watcher said, “I could ship Maxie & Chet very easily.”

Other fans couldn’t help but compare “Chaxie” to “Paxie.” “Chet and Maxie have chemistry–more chemistry than her and Petey,” one viewer admitted. A different Twitter user simply said, “Chet and Maxie > Peter and Maxie.” It’s clear that lots of people are digging the possibility of Maxie shifting gears and focusing on Chet.

Of course, General Hospital spoilers point to more Maxie and Peter drama for a while. They’ll be pushed together through some sort of adventure in the weeks ahead, but there’s no guarantee they’re meant to last. There’s always a chance it won’t work out, which could lead Maxie to cry on Chet’s shoulder.

Are you rooting for Maxie and Chet? Do you think they’d make a cute couple? We’ll give you updates as other GH news comes in. Stay tuned to the ABC soap and don’t forget to check CDL often for the latest General Hospital spoilers, updates and news.