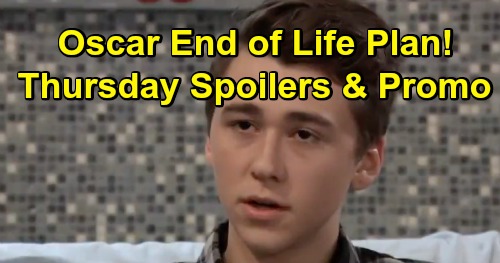 General Hospital (GH) spoilers for Thursday, March 28, tease that Dr. Monica Quartermaine (Leslie Charleson) will have a conversation with Dr. Kim Nero (Tamara Braun) and Drew Cain (Billy Miller). She’ll think they need to talk about the next steps for Oscar Nero (Garren Stitt). Monica will insist that it’s time to prepare Oscar for the end, but this is sure to be rough on his parents.

However, Drew and Kim will agree with Monica on this. None of them will want Oscar to face any surprises as his death rapidly approaches. He deserves honesty, so that’s what he’ll get. Speaking of honesty, Oscar will take the same approach with Cameron Webber (William Lipton). He’ll insist there’s something he has to tell him, so Cam will give Oscar his full attention.

Perhaps Oscar will want to discuss what happens after he’s gone. He won’t think Josslyn Jacks (Eden McCoy) should be stuck grieving forever, so he may urge Cam to help her move on. Cameron may not want to talk about it, but Oscar has seen the connection between them. He may ask Cam to look after Joss and keep his heart open to love when the time is right.

Other General Hospital spoilers say Harrison Chase (Josh Swickard) will have a question for Willow Tait (Katelyn MacMullen). He’s thrilled that she decided to remain in Port Charles, but he’ll have to wonder what changed her mind. Will Willow admit the truth? She may be wary about divulging too much info regarding “Wiley Cooper-Jones” and Brad Cooper’s (Parry Shen) interest in Dawn of Day.

Meanwhile, GH spoilers state that Jason Morgan (Steve Burton) will catch up with Carly Corinthos (Laura Wright). She’ll be disappointed by the latest Shiloh Archer (Coby Ryan McLaughlin) developments, but Jason will think they’re making progress. It looks like he’ll argue that Shiloh knows to be afraid and that’s a good place to start.

Over with Nina Reeves (Michelle Stafford), she’ll run into Elizabeth Baldwin (Rebecca Herbst) and try to clear the air. Nina will hope that since Charlotte Cassadine (Scarlett Fernandez) has stopped targeting Aiden Webber (Jason David), they can put all that behind them. Liz may agree, especially since Aiden’s moved on to bigger problems. Bianca’s mother refused to let Aiden attend her daughter’s birthday party, so even the parents are bullying him now!

Fortunately, Liz will get some reassurance when Willow arrives. Aiden’s teacher will promise to do whatever she can to provide a safe and healthy learning environment for him. Willow can’t control what the students’ parents do, but she can control what goes on in her classroom. Perhaps Willow will come up with some ways to help Aiden feel more included.

At Lulu Falconeri’s (Emme Rylan) place, she’ll get a visit from Valentin Cassadine (James Patrick Stuart). Naturally, Lulu won’t enjoy this little chat. She’ll insist that she doesn’t trust Valentin as far as she could throw him. Elsewhere, Dante Falconeri (Dominic Zamprogna) won’t even trust himself. He’ll tell someone he thinks he’s been brainwashed, which certainly seems to be the case.

General Hospital spoilers say Dante still has some scary episodes coming up, including one involving a knife and Carly. Jason will save the day as usual, but Lulu will have to face some heartbreaking facts eventually. Dante just isn’t the same man anymore and needs time away to heal his dark, programmed mind.

GH has some great scenes in store, so don’t miss them. We’ll give you updates as other news comes in. Stay tuned to the ABC soap and don’t forget to check CDL often for the latest General Hospital spoilers, updates and news.