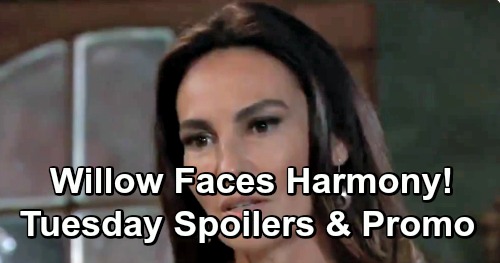 General Hospital (GH) spoilers for Tuesday, April 23, tease that Ava Jerome (Maura West) will make her pitch to Dr. Kevin Collins (Jon Lindstrom). She just insisted they can use Ryan Chamberlain’s (Jon Lindstrom) own hand to bury him, so Kevin will wonder what she has in mind. Ava’s being cryptic at this point, but we do know she’ll ask Kevin to be her fake boyfriend and hope third time’s the charm.

Kevin will turn Ava down initially, but a chat with Laura Webber (Genie Francis) will prompt a change of heart. After Laura talks to Felicia Scorpio (Kristina Wagner) about the plan to draw Ryan out of hiding, she’ll determine this is the best path to peace and safety. Port Charles could really use some closure. That’s especially true for Kevin and Ava, so Laura will think they should go for it.

Other General Hospital spoilers say Kristina Corinthos-Davis (Lexi Ainsworth) will have a meltdown as her intervention continues. She had some tearful, vulnerable moments that gave her family hope for a breakthrough, but she’ll put her walls back up on Tuesday. Kristina will refuse to let go of the new life she’s found at Dawn of Day. It’s clear that this group session will turn into an epic failure.

Later, Kristina will swipe Alexis Davis’ (Nancy Lee Grahn) phone. She’ll call Valerie Spencer (Paulina Bugembe) and beg for help, but she won’t get any details out before the phone’s ripped away. Still, Kristina’s urgent plea and tone will leave Valerie concerned for her well-being. She’ll dig around with Harrison Chase (Josh Swickard), which is where Molly Lansing-Davis (Haley Pullos) will come in.

Molly will relay the news that Kristina finally came to her senses and left Dawn of Day. When Chase and Valerie realize this info came from Alexis, GH spoilers say they’ll start putting the puzzle together. Valerie and Chase won’t buy the idea that Kristina willingly left town, so they’ll make this an official investigation and focus on Kristina’s family members as kidnapping suspects.

Over with Harmony Miller (Inga Cadranel), it looks like she’ll come face to face with Willow Tait (Katelyn MacMullen) again. Harmony will tell someone it’s been a long time, so Willow seems like a good fit for this scene. Willow used to go by Kali Miller back when she was part of DoD. Since Harmony and Willow shared the same last name, they appear to be mother and daughter.

Of course, we should really say adoptive mother and daughter. Nina Reeves (Michelle Stafford) still needs a bio kid and Willow is the most likely option, so stay tuned for more drama. At the community house, Shiloh Archer (Coby Ryan McLaughlin) will assure Sam McCall (Kelly Monaco) that she’ll be ready to join “The Trust” soon. Sam will be eager to see more of the process, but she’ll have to wait a little longer.

Next, Curtis Ashford (Donnell Turner) will plan a trip to Canada. He’ll want to see what else he can figure out about Ryan, but that’ll mean leaving behind a sick wife. Jordan Ashford’s (Briana Nicole Henry) condition is getting worse, which may be why T.J. Ashford (Tajh Bellow) will call his mom out on Tuesday.