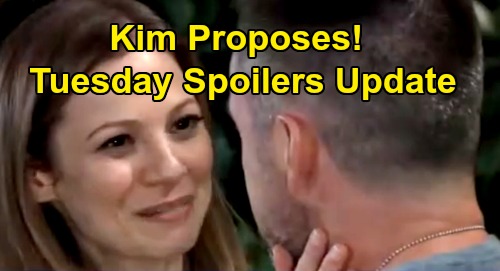 General Hospital (GH) spoilers for Tuesday, August 27, tease that Sonny Corinthos (Maurice Benard) will get grilled about his missing warehouse foreman, Barry Ziegler. Harrison Chase (Josh Swickard) just showed up to ask some questions, so Sonny may admit the guy got caught stealing. Of course, he should leave out the threats he hurled at Barry!

Sonny made it clear that Barry should leave town or else. He also ordered Jason Morgan (Steve Burton) to see to it that Barry got the message. Since the cops are involved, there’s a good chance some bloody proof was left behind. General Hospital spoilers say Jason won’t know anything about it, so Sonny will likely point the finger at Dev Cerci (Ashton Arbab).

After Chase departs, Sonny will scowl in Dev’s direction. Dev will wonder if there’s a problem, but Sonny won’t be sure just yet. He’ll hope Dev didn’t do something stupid in the name of loyalty – or revenge as the case may be. At GH, Michael Corinthos (Chad Duell) will seem concerned by Sasha Gilmore’s (Sofia Mattsson) bedside. He’ll make her equally concerned with his demeanor, so she’ll ask if he’s OK.

Michael will likely receive the Cassandra Pierce (Jessica Tuck) news before this visit. He may explain who Cassandra is and add that she targeted Sasha because she’s Nina Reeves’ (Cynthia Watros) daughter. Meanwhile, Nina will freak over this startling development. She’ll show Valentin Cassadine (James Patrick Stuart) the selfie Cassandra sent and launch a vicious tirade.

Nina will insist Cassandra’s going to pay a deadly price for this, but Valentin won’t want Nina getting her hands dirty. His wheels will already be turning when it comes to getting rid of Cassandra. Over with Liesl Obrecht (Kathleen Gati), she’ll offer Franco Baldwin (Roger Howarth) some guidance – in her own special way! Liesl will try to knock some sense into Franco by slapping him across the face.

Dr. O will want Franco to snap out of it and stop jeopardizing the happiness he’s found. Unfortunately, Franco doesn’t remember that happiness and doesn’t want it back. Kim Nero (Tamara Braun) is the one he’s after, not Elizabeth Baldwin (Rebecca Herbst). The fact that Franco has Drew Cain’s (Billy Miller) memories is troubling for several key players on canvas.

Liz will talk to Epiphany Johnson (Sonya Eddy) about Franco on Tuesday. She’ll take a moment to wallow in her sorrow and wish things were different. Liz will just want to figure out a way to get through to Franco. She’ll end up calling Kim later, so maybe she’ll think the object of Drew’s desire could help.

However, Kim will choose to ignore that call. She may be uncomfortable and even a little ashamed for her hidden Franco feelings. We all know they’re there, even if Kim doesn’t want to admit them yet. Her heart is being touched through Franco as Drew, so she’ll make a bold move to escape the strange experience.

General Hospital spoilers say Kim will pop the question to “Charlie” in Tuesday’s episode. She’ll hope Julian Jerome (William deVry) will marry her and help her quickly move on. Naturally, Julian will see right through Kim’s request. He’ll sense there’s something deeper going on – and it’s this complicated Franco situation. That may convince Julian to pump the brakes on Kim’s proposal.

At Charlie’s Pub, Scott Baldwin’s (Kin Shriner) day will go from bad to worse. He’ll already be fretting over Franco, but Bobbie Spencer’s (Jacklyn Zeman) meltdown won’t help. She’ll go off in a big way thanks to something Scott says. General Hospital spoilers say Bobbie will toss a glass of water in Scott’s face, so he’ll soon know exactly where she stands.

Perhaps this will involve the revisited marriage idea. Bobbie just caught the bouquet, so she’s next in line to get married according to tradition. If Scott gets pushy about that, it could certainly earn him a soaking. Scott tends to test boundaries and Bobbie tends to overreact, so that’s a risky combo.

It looks like some fantastic scenes are coming up. We’ll give you updates as other GH details emerge. Stay tuned to the ABC soap and don’t forget to check CDL often for the latest General Hospital spoilers, updates and news.