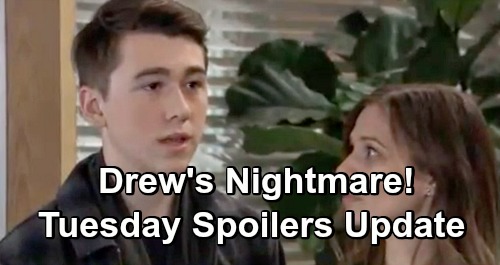 General Hospital (GH) spoilers for Tuesday, January 15, tease that Oscar Nero (Garren Stitt) will prepare for a grim fate. Now that he knows he’s a goner, he’s ready to get some answers about what to expect. As Dr. Kim Nero (Tamara Braun) stands by his side, Oscar will ask Dr. Terry Randolph (Cassandra James) some questions. He’ll want to know how long he’s got left and what to expect when he dies.

Terry will provide honest information and console Oscar as best as she can. The same goes for Kim, but she’ll be a mess deep down. Drew Cain (Billy Miller) will certainly be struggling as well. Monica Quartermaine (Leslie Charleson) will mull over the Oscar situation and all the drama his parents are dealing with. She’ll resolve to be there for Drew as Oscar’s days dwindle down.

Meanwhile, Cameron Webber (William Lipton) will make an admission to Josslyn Jacks (Eden McCoy). After she learns Cam’s on probation, she’ll naturally want to know why. Cameron will confess that it’s because he got busted in a botched weed deal for Oscar. Joss will be touched by Cam’s willingness to help and relieved that it all worked out OK. Probation was certainly getting off easy.

Other General Hospital spoilers say Anna Devane (Finola Hughes) will get some support. She’ll be worried about the damage to her eyes, which will be bandaged following her surgery. Dr. Hamilton Finn (Michael Easton) will also be on edge, but he’ll try to hide it for Anna’s sake. They’ll both hope Anna’s eyesight isn’t gone forever.

Finn will also have a conversation with his brother on Tuesday. GH fans can expect Harrison Chase (Josh Swickard) to get caught up in something that surprises Finn, but it won’t be a huge issue. Both Chase and Finn have more important things on their mind. They’ve got cases to solve – like the murder investigation and the mystery surrounding Anna’s sudden blindness.

Across town, General Hospital spoilers say Franco Baldwin (Roger Howarth) and Aiden Webber (Jason David) will enjoy some bonding time. They’ll get in the kitchen to whip up some baked goods, which will delight Aiden’s sweet heart. Franco will wonder why Aiden never mentioned how much he liked baking. He’ll be taken aback by how the boy comes alive when he’s passionate about something.

Of course, it’s probably not “cool” to like baking when you’re a boy in the third grade. Aiden may bring that up and help Franco understand that the other kids don’t like what he likes. Over with Elizabeth Webber (Rebecca Herbst), she’ll also get some insight into Aiden’s suffering. Charlotte Cassadine (Scarlett Fernandez) agreed to back off, but it seems other bullies may have taken her place.

Liz will grill Willow Tait (Katelyn MacMullen) and try to figure out what the problem is. She’ll ask if there’s something about Aiden that makes him a target. Aiden’s hobbies and toy preferences could be viewed as girly by the other kids, so that’d be one explanation. Plus, Aiden is quiet and sensitive. He’s nothing like the other rambunctious children in his class.

Willow will also cross paths with Julian Jerome (William deVry) in Tuesday’s episode. He’ll be wary of her agenda, so she may ask to see more “Wiley” Cooper-Jones pics or at least quiz Julian about him. General Hospital spoilers say Willow could become a real problem as time goes on.

It sounds like some shockers and shakeups are ahead. We’ll give you updates as other news comes in. Stay tuned to the ABC soap and don’t forget to check CDL often for the latest General Hospital spoilers, updates and news.