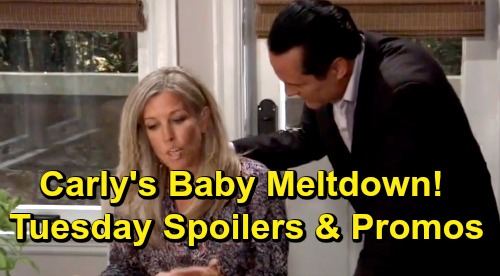 General Hospital (GH) spoilers for Tuesday, July 2, tease that there’ll be more conflict between Ava Jerome (Maura West) and Jasper “Jax” Jacks (Ingo Rademacher). Jax will have to put out another fire once Ava calls off the interview. GH fans know Ava can be awfully demanding, but Jax will do his best to keep her happy. However, Ava did sign the contract and may be obligated to cooperate – even if she’s less than thrilled.

Over with T.J. Ashford (Tajh Bellow), he’ll deliver some shocking news to Jordan Ashford (Briana Nicole Henry) and Stella Henry (Vernee Watson). T.J. will announce that he’s decided not to go back to med school in the fall. You can bet Stella and Jordan will have questions! Let’s hope T.J. opts to resume med school eventually since General Hospital will need more doctors in the future.

T.J. will also have some results to pass along. He’ll mention a recent DNA search, so this probably goes back to when Jordan needed a kidney. There was talk of maybe seeking out a family member of Jordan’s to help. She ended up getting Ryan Chamberlain’s (Jon Lindstrom) kidney, but perhaps some family reunions could still happen.

Other General Hospital spoilers say Harrison Chase (Josh Swickard) will open up to his brother. Hamilton Finn (Michael Easton) will hear about Willow Tait’s (Katelyn MacMullen) heartbreaking predicament and do his best to offer support. Chase will talk about the child Willow gave up at birth and how she wants to keep him away from awful Shiloh Archer (Coby Ryan McLaughlin).

Naturally, Chase will be beside himself with worry for Willow. He’ll need Finn to talk him out of breaking Willow out of lockup, so Finn will likely do just that. Chase would be better off finding better ways to make sure true justice is served.

Next, Franco Baldwin (Roger Howarth) will catch Elizabeth Baldwin (Rebecca Herbst) off guard. When she walks in, Franco will shout that Liz can’t be there. He’ll push his wife to go away, but this is likely about preserving some sort of surprise for their wedding reception. Franco will probably just want everything to be perfect on their special day.

GH spoilers say Franco will speak with Scott Baldwin (Kin Shriner) on Tuesday as well. He’ll suggest that Scott should try dating again. Franco won’t want Scott feeling lonely, so he’ll encourage him to get back out there and find someone to love. Scott will propose to Bobbie Spencer (Jacklyn Zeman) later this week, so it seems he’ll go a bit overboard!

In the meantime, Bobbie will have some tough moments as she continues to process her diagnosis. She’s facing type 2 diabetes now, so she’ll be concerned about managing it. Bobbie will insist she wants to stick around for her family. She’ll have a minor outburst as she tries to figure out how to move forward.

At home, Sonny Corinthos (Maurice Benard) will urge Carly Corinthos (Laura Wright) to step away from her research and get some rest. Unfortunately, Carly won’t listen. She’ll argue that the more they know, the better they’ll be prepared when the baby comes.

Carly will want to read everything there is to read about spina bifida, but Sonny may fear she’s jumping to all the worst-case scenarios. It sounds like it’s going to be a long night for this expectant couple. We’ll give you updates as other GH details emerge. Stay tuned to the ABC soap and don’t forget to check CDL often for the latest General Hospital spoilers, updates and news.