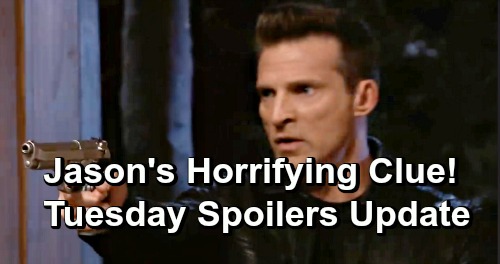 General Hospital (GH) spoilers update for Tuesday, March 5, tease that Harrison Chase (Josh Swickard) will have big news for Elizabeth Webber (Rebecca Herbst). He’ll let her know that Ryan Chamberlain (Jon Lindstrom) could be alive, so Liz will realize Franco Baldwin’s (Roger Howarth) claims weren’t so crazy after all! She assumed Franco was delirious from his stab wound, but he knew what he was talking about.

In Franco’s room at GH, Epiphany Johnson (Sonya Eddy) will try to wake him up. Franco’s been through a rough ordeal, but he’ll be on the mend in the coming episodes. Once Franco eventually awakens, he can offer even more info to Chase and Curtis Ashford (Donnell Turner).

Of course, Liz will also want the whole story. She’s been a mess over all Franco’s deception, so he needs to set the record straight. In the meantime, the teens’ road trip will come to a screeching halt. Oscar Nero’s (Garren Stitt) car will break down, so Cameron Webber (William Lipton) will take it somewhere for repairs.

Unfortunately, Oscar will learn the car can’t be fixed until tomorrow. He’ll tell Cam, Josslyn Jacks (Eden McCoy) and Trina (Sydney Makayla) that they’ll be stranded overnight. That could be dangerous since a serial killer’s headed in their direction. Ryan and Ava Jerome (Maura West) are driving over to Niagara Falls with Carly Corinthos (Laura Wright) tied up in the trunk!

Speaking of Carly, Jason Morgan (Steve Burton) will soon be hot on her trail. He’ll manage to find Carly’s cell phone in the parking garage, so he may assume there was a scuffle. At some point, Jason will get confirmation that Carly is facing extreme peril.

However, Jason will have another crisis to tackle first. Before all the Carly drama, he’ll talk to Sam McCall (Kelly Monaco) about Shiloh Archer (Coby Ryan McLaughlin). Sam will suggest that maybe their plan isn’t going to work. She may be tired of sneaking around with Jason, especially since they’re no closer to taking Shiloh down.

Despite Jason’s concerns about Sam’s safety, he may think they’re in too deep to back out now. Kristina Corinthos-Davis (Lexi Ainsworth) needs their help, so they really need to stick with it. She’ll be drawn even further into Shiloh’s web on Tuesday. General Hospital spoilers say Shiloh will shower Kristina with affection. He’ll gush about how Kristina’s a great gift to DOD as well as to him.

That’ll be exactly what seemingly smitten Kristina wants to hear. Her feelings for Shiloh should be stronger than ever by the end of their next chat. At Ferncliff, Dr. Kevin Collins (Jon Lindstrom) will urge Laura Webber (Genie Francis) to leave without him. He’ll send her down the secret passage alone and hope she’ll move faster without a blind man to hold her up.

General Hospital spoilers say Laura won’t love the idea, but she’ll agree to proceed by herself. She’ll want to tell police about Ryan and get help for Kevin ASAP. Another exciting adventure is ahead for Laura, so stay tuned. We’ll give you updates as other GH details emerge. Stick with the ABC soap and don’t forget to check CDL often for the latest General Hospital spoilers, updates and news.