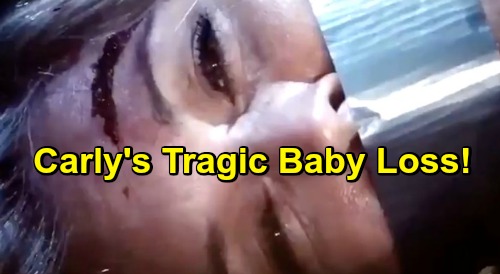 You can bet Carly wishes she’d taken Jason’s advice and just let Damian Spinelli (Bradford Anderson) take the lead on this. Instead, she ended up tangled in Ryan Chamberlain’s (Jon Lindstrom) evil web. Of course, Carly had no idea that by talking to “Dr. Kevin Collins,” she’d wind up in the trunk of a serial killer. We can’t put all the blame on her when Ryan’s the crazy murderer here!

Still, Carly could battle guilt if she loses this baby. It was odd for GH to suddenly make Carly pregnant. The plot twist came out of nowhere, so we have to wonder why they did it. You could argue that they want to beef up Sonny’s brood. Morgan Corinthos (Bryan Craig) is dead and Dante Falconeri (Dominic Zamprogna) could end up dead as well, so it wouldn’t hurt to add another child for Sonny.

At the same time, a baby isn’t a good replacement for adult characters. Even with rapid aging, it’ll be many years before Carly and Sonny’s little one would be old enough for real stories. With that in mind, perhaps General Hospital never intended for this baby to survive. This may simply set up a miscarriage that’ll tie in with some other storylines.

Sonny and Carly’s marriage could certainly be affected by this potential baby loss. Carly seemed far more excited than Sonny was about this baby, so that could be a major issue. She may feel like Sonny is almost relieved by the news that they won’t be parents again. It could spark some conflict to go along with Carly’s intense pain.

However, there’s a bright spot to think about. Michael Corinthos’ (Chad Duell) son, Jonah Corinthos, is alive and living as Wiley Cooper-Jones. Since “Wiley” has helped Michael cope, maybe he could help Carly cope, too. She might stumble across some clues thanks to spending more time with “Wiley.” Carly could overcome her loss through a major gain – the discovery of Jonah!

General Hospital spoilers say the baby swap storyline will heat up again following Ryan’s grand finale. Are you excited to see Michael reunited with his son? Do you think Carly will play a role in how it happens? We’ll give you updates as other GH details emerge. Stay tuned to the ABC soap and don’t forget to check CDL often for the latest General Hospital spoilers, updates and news.