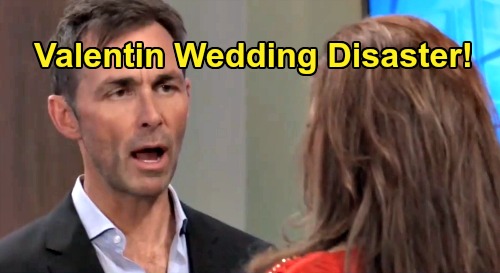 General Hospital (GH) spoilers tease that Nina Reeves (Cynthia Watros) has some good news headed her way. During the week of September 9-13, Nina will have a reason to celebrate. She’ll be on cloud nine as she shares this moment with Valentin Cassadine (James Patrick Stuart) and Liesl Obrecht (Kathleen Gati). There’s a good chance it involves Sasha Gilmore (Sofia Mattsson) being on the road to recovery.

GH fans can expect Sasha to survive her horrible ordeal, so Nina will be relieved. She’ll still have to worry about the threat Cassandra Pierce (Jessica Tuck) poses, but Valentin will undoubtedly offer reassurance. He intends to protect Nina, Sasha and Charlotte Cassadine (Scarlett Fernandez) while plotting Cassandra’s takedown.

Since this Cassandra crisis may not be resolved anytime soon, Nina will turn her attention to something else. The long-awaited “Valentina” wedding is almost here! Nina and Valentin have already delayed their nuptials, so they may not be keen on delaying them again. It’s just a matter of making sure Sasha is well enough first. Nina will absolutely want her “daughter” to watch her tie the knot.

General Hospital has offered seemingly endless mentions of this wedding over the past few months. Soap law tells us that it has to happen, and it has to be a disaster. GH wouldn’t have played it up as such a big deal otherwise. Nina will be elated on September 16, so she may get the green light from Sasha and Hamilton Finn (Michael Easton) on the looming wedding festivities.

As Nina prepares to walk down the aisle, Valentin and Sasha’s exposure will likely draw near. The walls may start closing in thanks to Liesl Obrecht (Kathleen Gati) and some other factors beyond their control. Even Sasha herself may be a problem. She’s bound to feel guiltier than ever since Nina’s been so sweet and nurturing throughout her illness. Sasha may be on the verge of cracking before long.

Of course, we can’t rule out a surprise wedding crasher. Could Cassandra show up to seek bitter revenge? That’d be risky on her part, but we wouldn’t put it past her. General Hospital spoilers say Cassandra is determined to take Nina down no matter what. These nuptials could turn into a life-threatening situation if Cassandra strikes a blow.

However, it’s high time that Valentin and Sasha’s secret came out. One way or another, the truth must be revealed to Nina. Let’s hope this will indeed be a wedding day of reckoning for the schemers! We’ll give you updates as other GH details emerge. Stay tuned to the ABC soap and don’t forget to check CDL often for the latest General Hospital spoilers, updates and news.