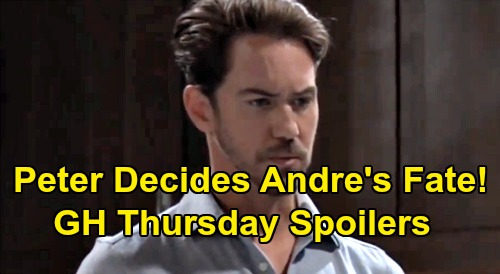 General Hospital (GH) spoilers for Thursday, September 5, tease that Cameron Webber (William Lipton) will deliver shocking news to Elizabeth Baldwin (Rebecca Herbst). He’ll blurt out that Franco Baldwin (Roger Howarth) was making out with Kim Nero (Tamara Braun) in public, so Liz will have to wrap her head around that. However, Liz will urge Cameron to understand that Franco’s just confused right now. She knows things look bleak, but she’ll try to keep hope alive that Franco will come back to them.

As for Kim, Liz may realize she’s even more of a threat than she thought. Of course, Cameron might point out that Kim tried to shut Franco down. Kim insisted she didn’t want to destroy the “Friz” family, so that may ease the blow of her latest betrayal. Even so, Liz will be keeping an eye on her!

Meanwhile, Franco will have a run-in with Julian Jerome (William deVry). It appears Franco may drop a hint or two about being the man Kim needs. He’ll rattle his rival, so Julian will ask if something happened between Franco and Kim. General Hospital spoilers say Kim and Alexis Davis (Nancy Lee Grahn) will walk in before Franco can answer, so some awkward moments are coming up.

Over with Valentin Cassadine (James Patrick Stuart), he’ll have a fierce warning for Liesl Obrecht (Kathleen Gati). GH fans know Liesl loves to stir the pot, so she’ll be doing some of that on Thursday. Valentin won’t appreciate Liesl’s behavior one bit. She poses a threat to his happiness with Nina Reeves (Cynthia Watros), so he’ll want to make one thing crystal clear to her.

Valentin will snarl that if this ship goes down, Liesl will drown right along with him. General Hospital spoilers say Valentin will want Liesl to know he means business. Nevertheless, Liesl will put a desperate plan in motion to get what she wants. Whether that involves Valentin or not, Liesl will be playing with fire.

Across town, Carly Corinthos (Laura Wright) will get some surprising updates. GH viewers know Carly and Sonny Corinthos (Maurice Benard) are letting Dev Cerci (Ashton Arbab) stay with them. It seems Sonny will consider making the arrangement more permanent. Diane Miller (Carolyn Hennesy) will be with them as Sonny talks about the possibility of adopting Dev, so Carly will be thrown for a loop.

Other General Hospital spoilers Peter August (Wes Ramsey) will loom menacingly over Andre Maddox (Anthony Montgomery). He just appeared in Andre’s room at GH, so Peter will have to decide what’s next. Peter will ask what he’s supposed to do as he stands near unconscious Andre. The stab wounds didn’t get the job done, so Peter may think about finishing Andre off.

Monica Quartermaine (Leslie Charleson) will pay someone a visit in the ICU next week, September 9-13, which probably means Peter will let Andre live for now. He might be interrupted before he can do anything deadly. Then again, Peter may just think Andre’s chances of survival are slim. He might roll the dice, let Andre live and hope his threat will die anyway. Peter could still take lethal action later if he sees Andre’s going to be a problem.

Finally, Jason Morgan (Steve Burton) will wonder who did this to Andre. He’ll ask who wants Andre dead as he mulls over the case with Mac Scorpio (John J. York) and Jordan Ashford (Briana Nicole Henry). Peter will try to make sure his tracks are thoroughly covered, but there’s always the opportunity for slipups.

It sounds like some hot drama’s ahead in Port Charles. We’ll keep you posted as other GH details emerge. Stay tuned to the ABC soap and don’t forget to check CDL often for the latest General Hospital spoilers, updates and news.