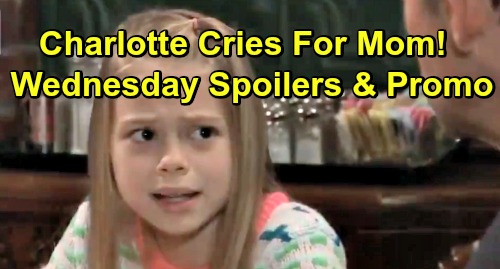 General Hospital (GH) spoilers for Wednesday, January 23, tease that Nina Reeves (Michelle Stafford) and Valentin Cassadine (James Patrick Stuart) will face a difficult task. Charlotte Cassadine (Scarlett Fernandez) will be expecting Lulu Falconeri (Emme Rylan) to pick her up, but that obviously can’t happen. Lulu’s still fighting for her life in a hospital bed at GH.

Charlotte will ask Valentin and Nina why her mommy isn’t coming for her. She’ll be confused and ultimately worried by their grim expressions. General Hospital spoilers say Charlotte will get the awful news of Lulu’s attack.

She’ll find herself in need of comfort, so Nina and Papa can help with that. However, it’ll be Laura Webber (Genie Francis) who’s able to relate and console Charlotte the most.

Meanwhile, Maxie West (Kristen Storms) will pay a visit to Nathan West’s (Ryan Paevey) grave. She’ll be upset after getting updates on Lulu’s dire condition. Maxie will have a chat with her deceased husband as she tries to process all this. The thought of losing Lulu will bring back terrible memories of losing Nathan, so Maxie should be a mess.

Maxie may also mention that she’s falling for a new man. She has deep feelings for Peter August (Wes Ramsey), so opening up at Nathan’s grave may help. Maxie’s dealing with some guilt, so she needs a chance to work through it.

It appears Lulu may also improve a bit by the end of the episode, which is great to hear – at least for GH fans. Ryan Chamberlain (Jon Lindstrom), on the other hand, won’t want to hear that at all!

During a conversation with Ava Jerome (Maura West), Ryan will get the wrong idea. He’ll feel like Ava’s telling him that Lulu is gone, but that won’t be the case. Ryan will have to keep living in fear of exposure.

Laura will certainly hope the killer’s caught and locked up soon. She’ll corner Jordan Ashford (Briana Nicole Henry) with Sonny Corinthos (Maurice Benard) by her side. Laura will insist that Jordan has to find the man who stabbed her daughter. She won’t rest until she gets justice for Lulu, Kiki Jerome (Hayley Erin) and anyone else this maniac has targeted.

He seemingly has the same virus Anna had, but they’d better be careful about digging around. That could lead to even more danger in Port Charles.

Other General Hospital spoilers say Sam McCall (Kelly Monaco) will call for backup. The others have cleared out, so she’s alone with Jason Morgan (Steve Burton) in the basement above the catacombs. Now that the ladder has given out, their problems have gotten so much worse.

Fortunately, Sam will call for help and come to Jason’s rescue. Jason almost always plays the hero, so it should be nice to see him need saving for once! We’ll keep you posted as other GH details emerge. Stay tuned to the ABC soap and don’t forget to check CDL often for the latest General Hospital spoilers, updates and news.