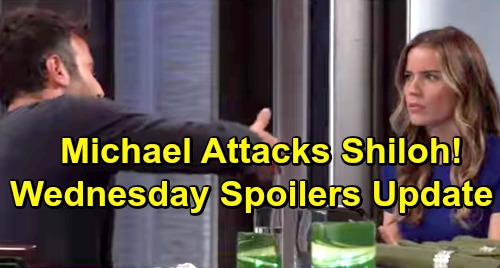 General Hospital (GH) spoilers update for Wednesday, July 10, tease that Sam McCall (Kelly Monaco) will head to the PCPD. She’ll announce that she’s got evidence against David Henry Archer aka Shiloh Archer (Coby Ryan McLaughlin). Harrison Chase’s (Josh Swickard) ears will perk up over the news. He’ll hope this is the break in the case they need.

Robert Scorpio (Tristan Rogers) is the new DA, so he’ll certainly be intrigued as well. The same goes for Mac Scorpio (John J. York), who’ll gladly listen to everything Sam has to say. She’ll hope the proof she offers is enough to have Shiloh thrown behind bars.

At the Metro Court, the lovely Sasha Gilmore (Sofia Mattsson) will catch Shiloh’s eye. He’ll sit down at her table and extend a hand as he introduces himself. Before Sasha can reply, Michael Corinthos (Chad Duell) will leap into attack mode. He’ll snatch Shiloh right out of his chair and insist the cult leader needs to stay as far away from Sasha as possible.

Once Michael gets rid of Shiloh, he’ll undoubtedly fill Sasha in on why she should be wary. There’s a good chance Sasha will praise Michael for being so brave and protective. Sasha will make a significant choice on Wednesday, so she may push for another conversation about their relationship. She might want to make it clear that she’s all in on a future with Michael.

Other General Hospital spoilers say Carly Corinthos (Laura Wright) will provide guidance, so that could be given to Sasha, Michael or someone else. Carly always has an opinion – and she isn’t shy about sharing it! She’ll gladly throw her two cents in and perhaps alter somebody’s path in the process.

Next, Dev Cerci (Ashton Arbab) will get updates on Oscar Nero Quartermaine’s (Garren Stitt) will reading. Cameron Webber (William Lipton) will bring Dev up to speed and perhaps warn him to be gentle with Josslyn Jacks (Eden McCoy). This is sure to be a difficult day for Joss, so it’d be best for Dev to lay off the smart remarks for a while.

Speaking of that will reading, Oscar’s loved ones will gather for it soon enough. That includes Kim Nero (Tamara Braun) and Drew Cain (Billy Miller), so they’ll have to address what happened on The Haunted Star. Drew will insist that Kim crossed a line, and she definitely won’t deny it. Kim’s horrified with herself for drugging and almost raping Drew, so she’ll offer plenty of sincere apologies.

Drew seemed a bit hazy on how far they actually went, so he’ll be glad to know Julian Jerome (William deVry) halted the sex session. General Hospital spoilers state that Kim will promise to get professional help. She already made an appointment and intends to take the necessary steps to deal with her grief.

Later, an unwanted attendee will be on hand for Oscar’s will reading. Will Shiloh arrive to shake things up? Since this will reading’s set to take a stunning turn soon, perhaps Shiloh’s arrest is looming. Let’s hope Sam’s evidence pays off and gets Shiloh locked up – at least for a while. The more this man suffers, the better as far as we’re concerned!

Other GH spoilers say Olivia Quartermaine (Lisa LoCicero) will get some assistance from Alexis Davis (Nancy Lee Grahn). They’ll tackle an interesting project together, so it sounds like they’ll make a good team. Over with Brick (Stephen A. Smith), he’ll meet up with Sonny Corinthos (Maurice Benard) and let him know Dev’s new identity is getting squared away.

Jason Morgan (Steve Burton) will catch part of their conversation and wonder what’s up. He’ll grill Sonny and Brick about the person they’re helping out. Sonny will let Jason know what they’re doing for Dev and defend the decision if need be. He’s determined to keep Dev alive and well, so this is the best possible strategy.