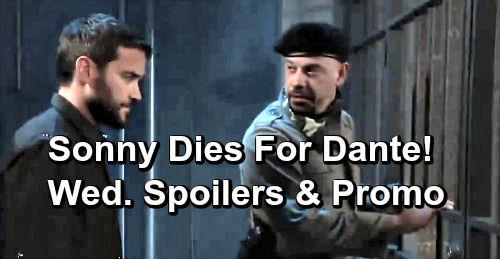 General Hospital (GH) spoilers for Wednesday, March 20, tease that Sam McCall (Kelly Monaco) will warn Jason Morgan (Steve Burton) about their target. She’ll insist that the Shiloh Archer (Coby Ryan McLaughlin) situation is getting a lot worse. Kristina Corinthos-Davis (Lexi Ainsworth) is pushing her family and friends away as she grows closer to Shiloh, so he’s certainly reeling her in now.

While Jason and Sam figure out their next move, Kristina will be ready to take her own next step. She’ll let Shiloh know she’s all in, so he’ll be happy to hear it. Shiloh will likely push Kristina to get the tattoo he brands his women with. They essentially become his property, which is fitting since he manages to control them so completely.

Willow Tait (Katelyn MacMullen) has one of those tattoos, but she was able to break free from Shiloh and Dawn of Day. Unfortunately, Shiloh’s still looking for her. Willow’s past will probably catch up with her in Wednesday’s episode.

General Hospital spoilers say Harrison Chase (Josh Swickard) will ask Willow how she’d feel about going away for the weekend. Willow will seem intrigued by the suggestion, but will a Shiloh sighting derail their plans? GH fans can expect total panic for Willow on Wednesday, so she may run into her former leader.

There’s a good chance Shiloh is also the real Wiley Cooper-Jones’ father, which would definitely add to the drama. Speaking of drama, viewers will see more of it in Alex Devane Marick’s (Finola Hughes) hospital room. Anna Devane (Finola Hughes) will STILL be trying to pull memories out of her twin in exchange for her eyesight. We’re all for a visit from the fun and feisty Alex, but let’s move this along!

Thankfully, it looks like Alex will offer a few memories and get the surgery on Wednesday. Too bad Anna won’t keep her promise. She vowed to let Alex off scot-free once the memories were revealed and the surgery was completed. Of course, Anna has no intention of doing that. She’ll eventually deliver Alex into WSB custody, so she’ll get one last cryptic memory hint out of spite.

It appears Anna will soon realize one of her children isn’t really her children. She might worry it’s Robin Drake-Scorpio (Kimberly McCullough) at first, but Peter August (Wes Ramsey) is the more obvious candidate. GH fans never liked the fact that Anna slept with Cesar Faison (Anders Hove), so an easy fix is saying it was Alex instead.

Other General Hospital spoilers say Robert Scorpio (Tristan Rogers) will try to figure out what happened to Sonny Corinthos (Maurice Benard). He won’t like the troubling news is receives. Meanwhile, Dante Falconeri (Dominic Zamprogna) will put Sonny’s plan in motion. A guard will spot a seemingly dead Sonny in his cell and demand to know what Dante did.

Dante will argue that he had no other choice. He’ll insist that he had to kill his father, but General Hospital viewers know Sonny’s just fine. This is all part of an escape plot, but anything can go wrong in the risky moments ahead.

Back in Port Charles, Olivia Falconeri (Lisa LoCicero) will push Carly Corinthos (Laura Wright) for an explanation. When Carly acts cagey about Sonny’s whereabouts, Olivia will determine that he ran off without telling anybody – except Carly of course. Olivia’s concerns will spark some worries for Carly, but Sonny and Dante will be on their way home soon enough.