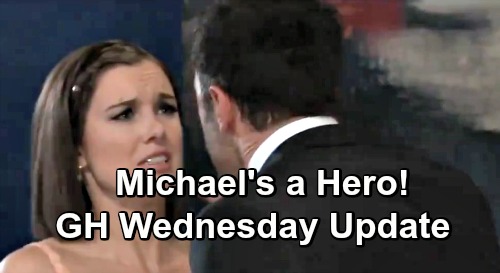 General Hospital (GH) spoilers for Wednesday, May 22, tease that Nina Reeves (Michelle Stafford) will remain riled over her heated encounter with Willow Tait (Katelyn MacMullen). In the ballroom, Nina will complain to Michael Corinthos (Chad Duell). She’ll suggest that his friend has a smart mouth, so Michael may sense that a confrontation has gone down.

Unfortunately, a far worse one will be going on in that moment. General Hospital spoilers say Willow will face Shiloh Archer’s (Coby Ryan McLaughlin) fury. He’ll confront her about hiding her pregnancy, but Willow will try to talk her way out of this. She may suggest that it was some other man’s child, but Shiloh won’t want to hear her lies.

GH fans can expect Shiloh to get downright vicious. He’ll almost look like he could strike Willow, but he won’t get the chance. General Hospital spoilers state that Michael will pull Shiloh away from Willow and throw him to the ground. He’ll be Willow’s Superman in Wednesday’s episode, so she’ll certainly appreciate it.

Meanwhile, Lucas Jones (Ryan Carnes) will make the connection. He’ll slide the puzzle pieces in place and most likely determine that Willow is Wiley Cooper-Jones’ birth mom. Brad Cooper (Parry Shen) will be on the hot seat as Lucas confronts him about his outrageous deception. Little does Lucas know that’s not even the real Wiley!

Elsewhere, Ava Jerome (Emme Rylan) will discuss Ryan Chamberlain (Jon Lindstrom) with Harrison Chase (Josh Swickard). She’ll believe Ryan will come looking for her, so she’ll slip out of the big event and prepare for a faceoff. Over with Scott Baldwin (Kin Shriner), he’ll seemingly spot the serial killer. Scott will definitely look rattled as he gazes at something shocking and utters Ryan’s name.

Lulu Falconeri (Emme Rylan) will also be anxious over Ryan’s return. Mac Scorpio (John J. York) and Felicia Scorpio (Kristina Wagner) will warn Lulu that her ruthless attacker is headed back to Port Charles. They don’t know Ryan has already arrived and knocked out Dr. Kevin Collins (Jon Lindstrom), so that could make safety a tricky issue on Wednesday.

Safety will also become a problem for Sam McCall (Kelly Monaco). She’ll have no choice but to leave the Nurses Ball early with Shiloh. He’ll be highly agitated about his ordeal with Willow and Michael, so he’ll just want to get out of there. Shiloh will probably hope to relieve his stress and regain some control by sleeping with Sam.

Jason Morgan (Steve Burton) could lose track of Sam since Shiloh will be in a different headspace. Their night may take them somewhere surprising, so Jason will have to stay calm and figure this out. Over with Carly Corinthos (Laura Wright), her heart will break for Josslyn Jacks (Eden McCoy). Carly will know how much Joss wants to honor Oscar Nero Quartermaine’s (Garren Stitt) final wish.

That recording is the last thing Oscar left behind for Josslyn. He pushed her to perform their song without him, but Carly will worry Joss won’t be able to get through it. General Hospital spoilers say Josslyn will also battle fears, so she’ll let Lucy Coe (Lynn Herring) know this isn’t happening after all.

Thankfully, Joss will get the encouragement she needs to take the stage. She’ll give a powerful performance, so don’t miss the heartfelt scenes ahead. We’ll give you updates as other GH news comes in. Stick with the ABC soap and don’t forget to check CDL often for the latest General Hospital spoilers, updates and news.