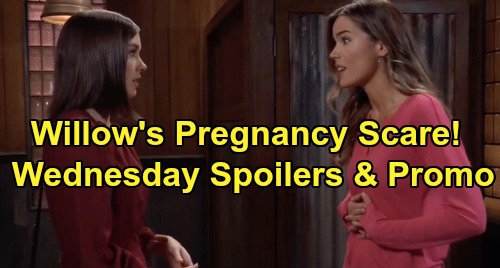 While Brad tries to find some other way to resolve this, Hamilton Finn (Michael Easton) will be a proud papa. He’ll happily watch Violet Barnes (Jophielle Love) play, and Anna Devane (Finola Hughes) will notice how he lights up at the sight of his daughter. She’ll love seeing how happy Finn is, but they’ll be oblivious to the drama happening across town.

Hayden Barnes (Rebecca Budig) balked when Nikolas Cassadine (Marcus Coloma) suggested she should leave Port Charles and hide somewhere with a new identity. However, Hayden’s latest run-in will change her mind. She’ll wiggle out of that baddie’s grasp and reconvene with Nikolas soon after.

Nik will remind Hayden that Valentin Cassadine (James Patrick Stuart) could come after her once again. He’ll insist Hayden has to leave now, so she’ll make the terrible decision to flee without Violet. Hayden just won’t be willing to rip Violet away from Finn, especially since being near her could pose a threat.

At Wyndemere, Valentin will assure Martin Gray (Michael E. Knight) that he has no intention of losing anything. GH fans know Martin intentionally “forgot” his tablet at Jasper “Jax” Jacks’ Ingo Rademacher) house. He knew Jax and Laura Webber (Genie Francis) would spill all kind of juicy details once they were alone.

Martin just played a recording of Laura and Jax discussing the codicil, so Valentin now knows what they’re looking for. Naturally, he’ll plan to step up his efforts and get to it first. Smug Valentin will feel confident that he’s got the upper hand now.

Other General Hospital spoilers say Willow Tait (Katelyn MacMullen) will find herself in a tricky situation. She’ll do some self-examining on Wednesday, so she’ll obviously have a lot on her mind. Willow will bump into a curious Sasha Gilmore (Sofia Mattsson) at one point. GH’s preview video shows Sasha saying, “It isn’t my place to ask, but are you—” Willow cuts Sasha off before she can finish her thought, but we can speculate about what Willow doesn’t want to talk about openly. Could Willow be pregnant?

Perhaps there’ll be some clues that lead Sasha to that conclusion on Wednesday. It makes sense considering there have been several kid-related conversations between Willow and Harrison Chase (Josh Swickard). Willow could at least have a pregnancy scare that gets them thinking about the future.

At GH, Alexis Davis (Nancy Lee Grahn) will feel like she’s rolled out the carpet for someone who wants her dead. She’ll blame herself for letting Kendra Lennon (Michelle Argyris) get too close, but the test results on that pill will throw her for a loop. The same goes for Neil Byrne (Joe Flanigan), who’ll be surprised to learn the pill was indeed a holistic anxiety treatment – no trace of poison in sight!

Perhaps Kendra figured she’d be a suspect and handed over this pill as a way to throw them off the trail. Regardless, GH fans know Kendra poisoned the powdered drink mix that Alexis had been gulping down. She’s indeed responsible for Alexis’ murder attempt, but this certainly isn’t the end of the story.

General Hospital say Kendra will make another attempt on Alexis’ life soon, so don’t miss all the action ahead. We’ll give you updates as other GH news comes in. Stay tuned to the ABC soap and don’t forget to check CDL often for the latest General Hospital spoilers, updates and news.