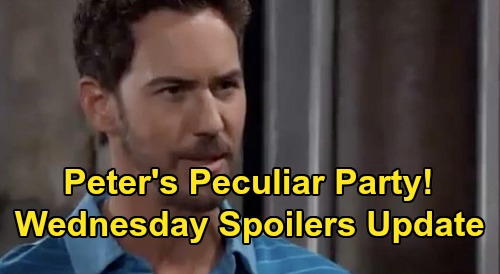 General Hospital (GH) spoilers update for Wednesday, October 2, tease that Harrison Chase (Josh Swickard) and Willow Tait (Katelyn MacMullen) will enjoy an evening out together at The Floating Rib. They’ve been through a lot in the past few days, with Wiley Cooper-Jones’ (Theo and Erik Olson) abduction and Shiloh Archer’s (Coby Ryan McLaughlin) death, and they might feel that they’re due to spend some quality time together. It looks like Chase will even have a little surprise for Willow, which should make their date night fun.

Across the way, it looks like Valentin Cassadine (James Patrick Stuart) and Curtis Ashford (Donnell Turner) will have a conversation of their own. They’ll be hanging out as part of Valentin’s bachelor party, and they’ll talk about Nina Reeves (Cynthia Watros), so Curtis may have a cautionary word or two for Valentin. He might want to make sure that Valentin won’t hurt Nina, and Valentin will assure Curtis that nothing will come between Nina and the happiness she deserves.

The bachelor party will have been orchestrated by Peter August (Wes Ramsey), who will have remarked to Maxie Jones (Kirsten Storms) earlier about the woes of being Valentin’s best man. He’ll note that since Valentin has no real friends, it’s tough to throw a good bachelor party. At least Peter, Curtis, and Valentin can hang out for a while and have a drink or two – perhaps that will suffice.

Speaking of wedding festivities, Sasha Gilmore (Sofia Mattsson) will go ahead and be a big part of Nina’s pre-wedding plans. Of course, Sasha feels guilty about being involved at all, given that she’s not really Nina’s daughter and is keeping this from her. But since she and Michael Corinthos (Chad Duell) decided to wait to tell Nina the truth until after Cassandra Pierce’s (Jessica Tuck) trial, Sasha’s stuck going along with the ruse for a while longer.

Sasha will tell Nina that no one is going to spoil this night for her, and it looks like the night will involve some spa activities, as they’ll be dressed in fluffy white robes, along with Maxie Jones (Kirsten Storms), Lulu Spencer (Emme Rylan), and Liesl Obrecht (Kathleen Gati). It seems that Sasha’s prediction will come true, as Nina is shown in Wednesday’s GH previews hugging Maxie and generally having a great time with the girls.

Meanwhile, Laura Collins (Genie Francis) and Kevin Collins (Jon Lindstrom) will be visiting Wyndemere for the evening. Laura finagled an overnight visit with Charlotte Cassadine (Scarlett Fernandez) at the castle, and she’s got plans to snoop around for the codicil to Mikkos Cassadine’s (John Colicos) will. Of course, having Kevin along with her might cramp her style a bit, or perhaps he’ll wind up helping.

GH spoilers say that Kevin will get the picture that Laura has an ulterior motive for being at Wyndemere, and it appears that he might try to get involved in the search. Now, whether Laura will let him in on what they’re searching for remains to be seen, but he’s shown in Wednesday’s GH previews handling some object while Laura watches looking a bit confused. At any rate, Laura will only have a few good hours to search, so she’ll need to be targeted.