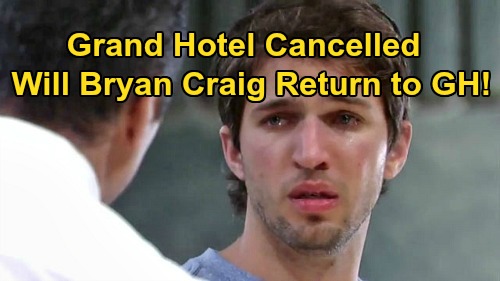 Grand Hotel’s Bryan Craig had high hopes for the series renewal and even asked fans to help bring up the ratings. However it seems Bryan’s efforts were too little too late. ABC apparently did see a promising future with the series and moved to cancel it instead of providing a second chance for rating improvement. Could Bryan score another series or could he plan to return to familiar ground as a fan favourite at General Hospital?

General Hospital’s Morgan now has a new little sister who could use her big brother. Morgan had health issues, although they were mental health issues and baby Donna Corinthos (Ella and Emma Hulen) has her own set of issues. Morgan, much like Michael Corinthos (Chad Duell) would love and protect this baby. Avery Corinthos (Ava and Grace Scarola) would love to have her big brother back as well. Morgan’s return would complete the Corinthos family. Sonny Corinthos (Maurice Benard) and Carly Corinthos (Laura Wright) would have both of their biological children alive and well. Morgan’s return would be welcome by most Carson fans.

The Role of Morgan Corinthos Belongs To Bryan Craig

If TPTB at General Hospital plan to bring Morgan back at any time, Bryan should be the one to play him. Now that he is available, this would be the perfect time to bring Morgan back. Both Maurice and Laura have spoken against a Morgan recast, but they would certainly be open to Bryan returning to his role as their youngest son?

Bryan has expressed before that he might be open to returning, at least for guest appearances, so why not now. He is a talented actor and probably won’t be without work for long. Morgan could return as a ghostly spirit to watch over his baby sister. Alternatively, Morgan could return from the dead and leave Port Charles again if Bryan gets a new prime time job. There are all kinds of possibilities that could allow Morgan Corinthos played by Bryan Craig to return to GH.

Will Bryan return home to his GH family and his role as Morgan Corinthos? Does Bryan have another job lined up already? Time will tell if Bryan will return, but Morgan fans will certainly be waiting with bated breath. CDL will report back on any new developments in Bryan’s career. Come back to CDL for all of your General Hospital spoilers, news and updates!

‘Grand Hotel’ Canceled After One Season at ABC https://t.co/OhVJ8g6BPL