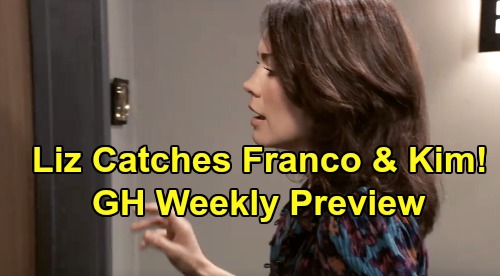 General Hospital (GH) spoilers tease that it will be a week involving an edge-of-your-seat hookup and a fierce courtroom face-off. The new GH promo for the week of September 16 promises a lot of action, so let’s dive right in! First off, the promo addresses something that’s been developing for a while now, and that’s the intense attraction between Kim Nero (Tamara Braun) and Franco Baldwin (Roger Howarth). The promo shows more than one scene of the two kissing passionately and clearly headed toward a hot hookup.

But it looks like Kim Is fully aware of the ugly truth about the whole situation, and that’s that Franco is her good friend Elizabeth Baldwin’s (Rebecca Herbst) husband. Of course, Franco isn’t really Franco right now – he’s got Drew Cain’s (Billy Miller) pre-2012 memories, but the fact remains that he’s in Franco’s body, and for Kim to sleep with him would be a huge betrayal of Elizabeth. Kim is shown in the preview addressing this truth and calling out Franco as her friend’s husband.

But it doesn’t look like Franco/Drew is going to relent in his pursuit of Kim. He’s heard in the promo insisting to Kim that he’s “not Franco,” and according to GH spoilers, Kim and Franco/Drew will indeed end up sleeping together. And to make matters even worse, it appears from the promo that Elizabeth is going to walk in on them together. She’s shown walking up to a door and hesitating – will she barge on in and catch them in the act?

Next, the new GH promo addresses the ongoing Shiloh Archer (Coby Ryan McLaughlin) situation. He’s shown in the promo being led into a courtroom in his orange prison jumpsuit, presumably for his trial, at which he’s planning to testify in his own defense. Presumably, others who have been involved with him will have to testify as well, including Sam McCall (Kelly Monaco), Kristina Corinthos-Davis (Lexi Ainsworth), and Willow Tait (Katelyn MacMullen).

Speaking of Willow, she’ll be present in the courtroom with Harrison Chase (Josh Swickard) as Shiloh arrives at court, and Shiloh will have some unsettling words for her. He’s shown in the promo telling Willow that “when this is all over, we’ll be together again.” Of course, that’s just crazy talk since there’s no way that Shiloh is going to be released from prison after what he’s done. But Shiloh’s probably not anticipating a release as much as he’s anticipating an escape.

As GH viewers will remember, Shiloh was recently promised by Nelle Benson (Chloe Lanier) that she could help him get his son, Wiley Cooper-Jones (Theo and Erik Olson), back. Of course, that was just a big ploy, since Nelle knows that Shiloh’s son, the original Wiley, actually died shortly after birth. But Nelle’s apparently got Shiloh hoping for an eventual reunion with his son – and when that time comes, he’ll surely be devastated to learn the truth.

But for now, he’ll have hope and will delight in taunting Willow. In the promo, Willow appears pretty unnerved by Shiloh’s comments, and she’ll probably be unnerved throughout the whole trial. And given that Shiloh is planning on testifying in his own defense, he’ll probably spill a lot of touchy details about his time with Willow – something that will be disturbing for both her and Chase to hear.

It sounds like we’re in for a big week on GH! Stay tuned to the ABC soap and don’t forget to check CDL often for the latest General Hospital spoilers, updates, and news.