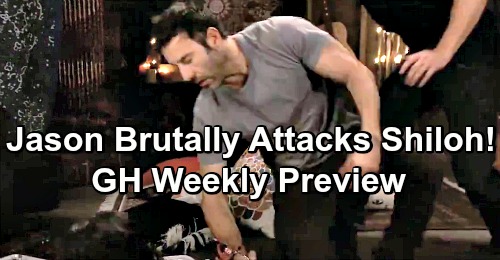 Of course, Jax has returned to Port Charles at the request of his daughter Josslyn Jacks (Eden McCoy). Josslyn has just lost her first love, Oscar Nero Quartermaine (Garren Stitt), to brain cancer, and she needs her dad for support. Jax will be there for his daughter to get her through this difficult time, but GH spoilers also indicate that he’ll eventually reveal that he’s got other business dealings in Port Charles.

However, not everyone will be happy to see Jax. Sonny Corinthos (Maurice Benard) and Jax are shown together in what looks to be a tense moment. Carly approaches and asks the two if they’re getting along ok, to which Sonny replies, “Peachy.” Of course, the two men tend not to see eye to eye on anything, so it will be interesting to see how they come together for Josslyn’s sake.

The new General Hospital promo also indicates that the tension will continue between Hamilton Finn (Michael Easton) and Robert Scorpio (Tristan Rogers). As GH viewers know, Robert is a thorn in Finn’s side, as Robert continues to hang around Anna and remain a major part of her life.

The promo shows Anna and Finn in a close moment together, when Robert characteristically barges in and interrupts them. Finn looks absolutely exasperated by the scene, as he’s been trying to find the right moment to pop the question to Anna. It looks like that moment will continue to elude him…thanks to Robert.

Finally, the new GH promo shows some action where Sam McCall (Kelly Monaco), Jason Morgan (Steve Burton), and Shiloh Archer (Coby Ryan McLaughlin) are concerned. Jason is shown totally busting down the door of the DOD house, while Sam and Shiloh are upstairs together in the attic.

Sam is shown laying on her stomach in the attic with some sort of gown on, with Shiloh hovering nearby, as if he’s going to be the one to tattoo her in a private ceremony. Exactly what’s going on there remains to be seen, but it looks like Sam’s getting in pretty deep, and she’s nearing a point of no return.

Luckily, the promo then shows Jason bursting into the attic and walloping Shiloh over the head with some instrument, which looks like his gun! Hopefully, he’s there in time to save Sam from getting tattooed or worse. And let’s hope that Sam and/or Jason are able to retrieve Kristina Corinthos-Davis’ (Lexi Ainsworth) pledge from the DOD records room, which was Sam’s entire objective.

It certainly looks like we’re in for an exciting week on General Hospital! Stay tuned to the ABC soap and don’t forget to check CDL often for the latest General Hospital spoilers, updates, and news.