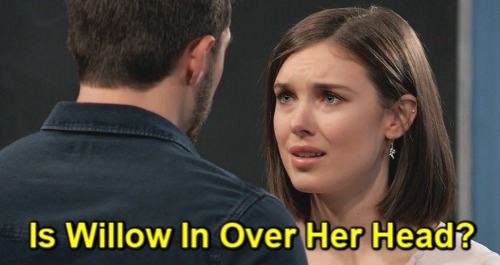 General Hospital (GH) spoilers tease that Willow Tait (Katelyn MacMullen) could end up in over her head. Of course, some fans might argue that she’s there already, but things are about to get even worse thanks to Julian Jerome’s (William deVry) plan.

Now Lucas Jones (Ryan Carnes) and Brad Cooper (Parry Shen) don’t have to worry about the adoption file tipping Shiloh off. Unfortunately, that doesn’t completely solve their problem. Diane Miller (Carolyn Hennesy) is Willow’s attorney and has copies of the records. She could blow this for everyone if she’s required to hand those over.

Willow pointed out that Diane would never destroy the records herself, which is why Julian tasked Willow with doing it. Will Willow actually carry out the plan? She’s awfully desperate, and desperate people do desperate things!

Willow called Diane to set up a meeting, so that may have been step one. Perhaps Willow will indeed try to destroy last remaining proof and keep Shiloh at bay.

If Willow pulls this off, that could mean good news and bad news. The good news is the paper trail would be truly gone at that point. The bad news is this could lead to some legal trouble. When soap characters commit crimes, it often leads to getting caught or at least close calls. Sometimes guilt even leads to confessions.

General Hospital spoilers say Willow will make a stunning admission on June 19. Will she come clean about destroying Diane’s copies? Willow might tell Harrison Chase (Josh Swickard) the truth and hope he’ll still have her back. It’d be nice to see Chase put Willow first and bend the rules for her.

There may be other incidents along the way that Chase will have to take care of. Will he become a dirty cop for a good cause? Chase agreed with Michael Corinthos (Chad Duell) about doing whatever it takes to stop Shiloh. GH spoilers say that may include covering Willow’s actions and putting his own job on the line.

After Shiloh’s arrest, Chase assured Willow that the law was on her side. It may not stay that way as things spiral out of control. In fact General Hospital spoilers state that Shiloh will beat the rap and walk free! This could certainly test their relationship, so General Hospital fans will want to stay tuned.