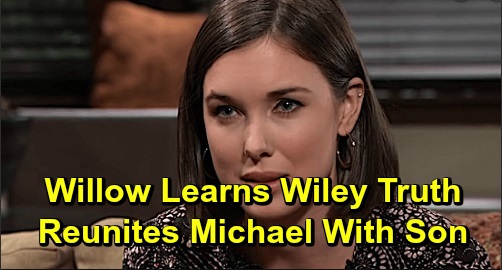 General Hospital (GH) spoilers tease that Nelle Benson (Chloe Lanier) will keep stirring the pot. She may be a prisoner at Pentonville, but that doesn’t mean she can’t wreak more havoc. Nelle always finds ways to manipulate and cause drama, so that’ll continue to be the case in the week ahead.

Nelle will have two interesting meetings on September 30 – and one of them could be crucial. She’ll have a brief run-in with Josslyn Jacks (Eden McCoy) at the park, where she’ll be doing some community service. However, it’s a meeting with Willow Tait (Katelyn MacMullen) that could be a game-changer.

Willow will be at Pentonville to fill her mother in on Shiloh Archer’s (Coby Ryan McLaughlin) death. She’ll feel like it’s something Harmony Miller (Inga Cadranel) would want to know, so she’ll head over and drop the bomb. Of course, Nelle won’t plan on dropping any bombs of her own, but it looks like she’ll at least want to speak with Willow and push her buttons.

Willow is good friends with Michael Corinthos (Chad Duell) and has heard all the Nelle horror stories. She should be incredibly wary when she meets Michael’s manipulative ex. Nelle can never resist throwing in a hint or two about “Wiley Cooper-Jones’” real identity, but she may be playing with fire here. Sooner or later, Nelle may give one clue too many and cause things to start adding up.

General Hospital viewers know Brad Cooper (Parry Shen) doesn’t view Nelle as a threat. Julian Jerome (William deVry) had concerns when he found out Nelle and Brad swapped babies, and one of them was the potential for Nelle to blow everything. However, Brad feels like Nelle’s a sealed vault when it comes to this secret. He knows Nelle would never want her child anywhere near the Corinthos clan.

Unfortunately, Brad’s not considering the possibility that Nelle could simply slip up. She’s quite the schemer, but all her plans fail eventually. GH viewers have seen that time and time again. Nelle could easily make some comments to Willow that come back to haunt her. They may not make sense to Willow in the short-term, but they could have major long-term consequences.

Will Willow learn something that helps her put the puzzle together? It’d be fitting for the fake birth mom to blow this secret wide open. Willow has always been a hero in this “Wiley” story, so she may become Michael’s hero as well. Perhaps Willow will be the one to expose Nelle’s deception and reunite Michael with his son.