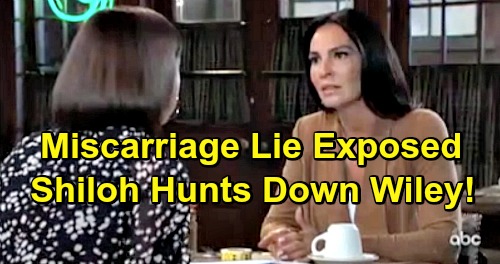 General Hospital (GH) spoilers tease that Harmony Miller (Inga Cadranel) and Willow Tait (Katelyn MacMullen) are keeping some dangerous secrets. During their recent conversation, Harmony admitted she found Willow’s positive pregnancy test in the trash at DoD. She kept it a secret from Shiloh Archer (Coby Ryan McLaughlin), but Willow thinks that’s probably because Harmony wanted him for herself.

Of course, Willow lied about having a miscarriage, but she did confess to once being pregnant with a boy. That could be important later. Harmony seemed shaken after Willow tearfully ranted about how she “pimped out” her own daughter.

It’s possible she’s got some sense of humanity somewhere. Harmony told Shiloh it was time for her to return to Beechers Corners, but will he let her go?

Shiloh looked almost miffed by the suggestion, so he may not like that Harmony’s the one giving it. He likes to decide when women come and go within the organization. Besides, Shiloh isn’t a quitter.

He’s determined to lure Willow back to Dawn of Day, so he may argue that Harmony didn’t try hard enough. Perhaps Shiloh will expect Harmony to stick around and find another way – or else.

GH fans can’t forget that members of “The Trust” hand over leverage before their initiation. That leverage can be used if someone leaves DoD, but it could probably used to encourage success as well. General Hospital spoilers say the pressure might be enough to make Harmony blurt out Willow’s secret, including the miscarriage lie.

Shiloh can be awfully sneaky, so he could easily have some of his followers keep tabs on Willow. He might even get a lucky break by spotting Willow with Brad Cooper (Parry Shen) and “Wiley Cooper-Jones” himself.

Shiloh knows he can’t trust Willow now, so he may doubt she lost the baby. If he spots her looking at “Wiley” longingly, it wouldn’t take much for a smart guy like Shiloh to put this together.

Then again, Harmony herself could do some digging and uncover the shocker. She may be looking for a way to please Shiloh if he makes her stick around. Harmony won’t want her pledge exposed, and she might think this would be a good strategy to draw attention from Shiloh’s new favorite, Sam McCall (Kelly Monaco).

General Hospital spoilers say there are a few story options here, but it all adds up to the same thing. Willow’s worst fear will come true when Shiloh learns she had his baby and that baby is still alive – or so she thinks! The Wiley and Jonah Corinthos swap will bring one more complicated layer to all this.

It sounds like some exciting twists and turns are ahead in Port Charles. We’ll give you updates as other GH news comes in. Stay tuned to the ABC soap and don’t forget to check CDL often for the latest General Hospital spoilers, updates and news.