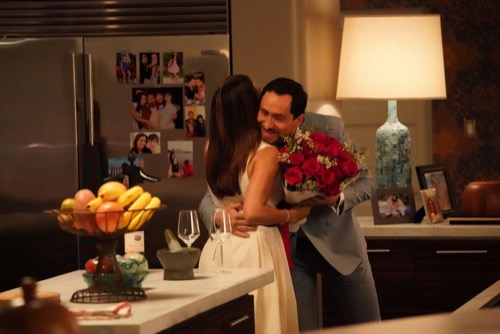 Tonight on ABC, Grand Hotel airs with an all-new episode Monday, September 2, 2019 episode and we have your Grand Hotel recap below. On tonight’s Grand Hotel season 1 episode 12 called, “Dear Santiago,” as per the ABC synopsis, “Alicia and Javi continue their mission to figure out what really happened to their mother.

Santiago still finds himself bound to Mateo, as startling secrets from his past come to light.”

Tonight’s episode of Grand Hotel looks like it is going to be great and you won’t want to miss it, so be sure to tune in for our live Grand Hotel recap at 10:00 PM ET! While you wait for our recap hit the comments and check out the rest of our television recap, videos, spoilers & more, here!

Ten Years Earlier – Santiago comes home to his wife. It is their anniversary. She thanks him for the flowers and tells him Gigi is here. She and Felix are in a fight. Santiago comforts Gigi. His wife gets jealous.

Present Day – Javi and Alicia sit, contemplating what everyone is hiding about their mom. Meanwhile. Helen calls Malcolm and Jason in. She needs Malcolm to fix some things and Jason needs to watch him. Malcolm hasn’t been doing well since chemo started.

Danny meets with his detective friend. Since Theresa and Mateo disappeared on her watch she is being transferred. She gives Danny his sister’s files, it is the least she can do.

Carolina is engaged again to Byron. Gigi and Yoli are surprised and think she is crazy.

Javi asks MMalcolmabout his mother. Malcolm knows her stuff was out in the storage facility in the cellar. He offers to open it for Javi.

Alicia finally talks to Danny. He tells her what he knows about Sky and how he found a newspaper clipping of her mother’s death. He doesn’t know why Sky had it in her locker but he wants to work together to find out. Alicia tells him no.

Mateo comes back to work and tells Santiago Theresa isn’t coming back. Santiago is disgusted. He tells Mateo to get out but Mateo thinks Santiagoowes him.

Javi and Alicia go through storage finding old things and reminiscing about their memories. Alicia recalls when her mom gave her $100k when she was just 15. They find her death certificate saying she had a heart attack and her power of attorney, showing how she gave Santiagoeverything.

Jason lets Danny use his mom’s computer to check to see if there really was a power outage the night his sister went missing. It looks like Sky went to the 6th floor a lot and the roof the night she disappeared.

Byron tells Carolina his family doesn’t approve. They have taken his money. But he doesn’t care. As long as they are together. Carolina looks sad. Later, she tells Gigi and Yoli since they aren’t happy she wont marry Byron. They tell her they are over it. She looks upset.

Alicia and Javi corner the hotel doctor about their mom’s death. She signed the death certificate. She tells them it wasn’t a heart attack and she wasn’t an addict. They need to ask Santiagothe rest.

Jason and Danny head to the roof and find Sky’s lighter. Meanwhile, Malcolm and Helen get stuck in the elevator he was supposed to fix. He admits he stopped doing chemo. His cancer has spread.

Javi and Alicia confront Gigi and Santiago. They want to know about their mother.

They explain to Javi and Alicia about how their mother had bipolar. Santiagodoesn’t tell them how he cheated once but shares that they tried to work on their marriage. She got on meds but went off of them here and there. She gave Felix all of the hotel’s money. That is when she gave Santiagopower of attorney. Gigi found her later after she committed suicide. Gigi shares she left no note, although she did. They all cry and hit one another.

Carolina learns Byron was just testing her. He didn’t lose his money but breaks up with her.

Jason and Helen cry over Malcom. They need to love and support him. Ingrid runs into and upset Jason. She brings him to an empty hotel room so he can lay in bed and pretend his life is different just for a minute.

Danny runs into Alicia outside at the pool. They sit alone. She tells him about her mother. She understands about the not knowing. She offers to help him find out about Sky.

Mateo blackmails Santiago. If he doesn’t make him a partner, everyone will find out about the girl.

Danny shows Alicia the key he has to the 6th floor room where her mother was.

Gigi and Santiagotalk. She wants them all to be one family and that means adding her girls to his will.

Helen puts herself on leave with Malcolm. They are going to Paris. He is thrilled. As he tells her how happy he is he has a stroke.

Danny opens the door to the 6th floor. He heads to the vent and finds the suicide letter. He reads to himself while Alicia sits on the bed. Santiagocheated with Helen. Jason is his son. Meanwhile, Santiagowatches video footage from the night. It shows Gigi coming out of a room with blood all over her.