BY hellodrdavis on December 2, 2019 | Comments: one comment
Related : Hallmark Channel 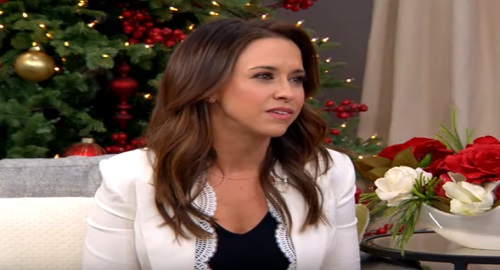 Hallmark Channel news has some great information to pass on about an upcoming movie that’s a part of Hallmark’s Countdown To Christmas series. The movie is “Christmas In Rome” and stars two All My Children alums whom you’ll probably recognize – Lacey Chabert and Sam Page. Lacey played Bianca Montgomery on AMC back in 1992-1993, and Sam played Trey Shepard from 2002-2003.

Since their AMC days, both Lacey and Sam have gone on to star in numerous TV series and movies. Lacey is best known for her role in the Fox drama Party of Five, and she’s appeared in numerous feature films, including Mean Girls, Ghost of Girlfriends Past, and Daddy Day Care. Sam is best known for his roles on Mad Men, House of Cards, and Desperate Housewives.

“Christmas In Rome” is about a tour guide named Angela who gets fired from her job in Rome right before Christmas. She ends up crossing paths with an American executive named Oliver who is there to purchase a high-end ceramics company. Oliver enlists Angela to be his tour guide of the city, because the owner of the ceramics company (played by Franco Nero) won’t sell it to him until he learns “the heart and soul of Rome.”

In the behind-the-scenes preview for “Christmas In Rome,” Lacey shared some of her thoughts about the movie. “I kind of feel like Rome plays a character in this movie – it’s romantic, it’s beautiful. One of my favorite lines in the movie is that Rome isn’t about what you see, it’s about how it makes you feel, and that ends up being a huge lesson that she’s able to impart on Oliver.”

She continued: “It really is about taking in your surroundings and letting Rome take you on a journey. And in this movie, not only does my character take Oliver on a journey, but hopefully the audience will be taken on a journey.”

In addition, Sam had great things to say about his experience working on the film. “It’s a really fun set. Hallmark movies usually are. To be involved in a movie that’s so important with Lacey being the star and working with Franco Nero and working in Rome, it’s just the best of all worlds.”

Of her co-star, Lacey said: “Sam and I hit it off right away. He makes it so easy just to be in the scene together and connect and it’s awesome. We make each other laugh – probably too much!”