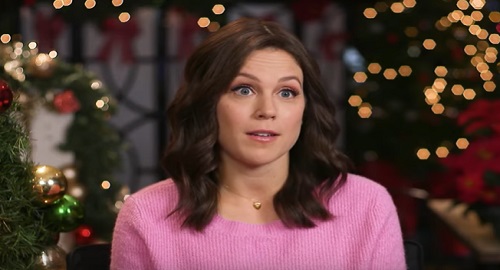 Hallmark Channel news has some great information to pass on about a new Hallmark Movies & Mysteries Movie that you won’t want to miss. It’s called “Sense, Sensibility, & Snowmen” and it premieres on Saturday, November 30th at 9pm Eastern on the Hallmark Movies & Mysteries Channel. It’s based loosely on the Jane Austen novel “Sense & Sensibility” with a modern holiday flare.

“Sense, Sensibility, & Snowmen” is about two sisters who are huge Christmas enthusiasts and who own a party-planning business. As it turns out, one of their new clients is a toy company and they don’t see eye-to-eye with the company’s CEO. The CEO hires them to plan the company’s holiday party, and they’re under pressure to pull off the perfect event in just nine days, and a romance develops between one of the sisters and the CEO.

The lead role of Ella is played by actress Erin Krakow, whom you may remember from When Calls The Heart and Army Wives. The role of Edward the CEO is played by Luke Macfarlane, whom you may have seen on the Syfy series Killjoys and Brothers and Sisters. Ella’s sister Marianne is played by Kimberley Sustad, from the TV series Travelers and Unspeakable.

In the behind-the-scenes feature about the movie, the actors dished about their characters, offering a little more information about what to expect in this feel-good holiday film. “I am playing Ella in this movie,” Erin Krakow said. “She’s a bright ball of energy. She’s got big dreams, and specifically big dreams for the company she and her sister own, Dashwood Party Planners.”

And of his character, Luke Macfarlane said, “I play the character of Edward…kind of a squared-away guy. He likes his order, he likes his planning…And to make a good impression, he has decided to throw a big party, and Ella comes into my life to try to help me throw the best possible Christmas parties.”

And what will audiences love about this movie? Luke summed it up nicely: “I think what audiences are going to love about our movie other than the fact that it’s got its roots in a great piece of literature, it’s also a reminder that spending time with family at Christmas is important.”

“Sense, Sensibility, & Snowmen” sounds like a great Christmas romance for the entire family! Will you be watching? Enjoy all your Hallmark Channel holiday movies and don’t forget to check CDL often for the latest Hallmark Channel News.