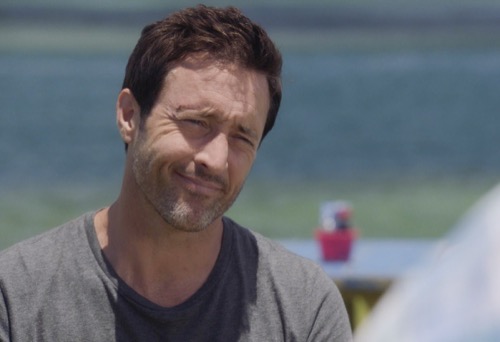 Tonight on CBS Hawaii Five-0 air with an all-new Friday, September 27, 2019, episode and we have your Hawaii Five-0 recap below.  On tonight’s Hawaii Five-0 season 10 episode 1 called, “ua ʻeha ka ʻili i ka maka o ka ihe, ” as per the CBS synopsis, “In the Season 10 premiere, a new ally helps McGarrett and Five-0 when mob bosses on the island are being targeted by an assassin. Also, Five-0 says goodbye to one of their own.”

Jerry was still recovering at the hospital some two weeks later. He was doing much better now and his experience seems to have changed him for the better. Jerry realized he hasn’t done much with his life. He thought he was dying at one point and all he could think about was Dungeons and Dragons. Jerry was in the middle of a fierce campaign when he was shot. His first thought was what they would do without him if he died and that just a little sad. Jerry has even traveled as extensively as he wanted and he now wants to experience his life some before he worries about a game.

Jerry was telling Junior everything when Tani came in. She was dressed to the nines and it was apparently because she was going out on a date with Junior. The two had plans and that meant even they had more going for them than Jerry. But Jerry didn’t hold the date against them. He knew it was a long time coming and he was happy for his friends. It turns the two had a date at the opera. They both thought Tani would fall asleep in the middle and surprisingly she didn’t. She stayed awake because she was interested in the drama of it all.

Tani and Junior were so invested in the performance that they didn’t realize anything was wrong until the lights came back on. It was around then that noticed a woman panicking and a man slumped over. The dead guy was identified as Billy Sato. He was the head of the triads and he assassinated in the middle of the performance. And with his death, a date soon turned into a case. Tani and Junior both had to call it in.

They also interrupted McGarrett’s date with Brooke. Brooke was a parent that Danny knew and he set them up because he thought McGarrett should really get out of his funk. Not that McGarrett considers a funk. He thought that he was getting back out there and Danny thought that he was struggling with a new dating world. McGarrett was on the older side. He hadn’t had to go on a date in a while and it showed when he almost ruined things by nonstop talking. McGarrett had was on the path of making up for blunders when he got the call.

He had to end the date early, but they agreed on a second date and he was still in a good mood by the time he showed at the theatre. That’s where he learned what happened. Both Tani and Junior contained the scene when they realized a man had been killed and they believed they stopped everyone from leaving in time. They also suspected that the shooter might still be in the building. Five-0 went inside and they went floor by floor. They were flushing out the culprit, and it worked because he tried to make a run for it and McGarrett gave chase.

Except the guy got away. McGarrett could have jumped off the roof after him (because that’s what he usually does) and this time he hesitated. Danny thought it was another sign of McGarrett getting old. He made of McGarrett for it and he was having a good laugh as McGarrett worked up a sketch of the shooter. The shooter had gotten away in a stolen car. They contacted the guy that owns the car and they were able to later return it to him after it had been abandon. The guy didn’t mind. And he was also a great help to Lou who was looking to downsize now that his kids were out of the house.

Anyways, the sketch of their perp ended up helping the team in a big way. They found out a woman was looking for the same guy. She went around to all the bars and handed out pictures of him. She left behind a phone number as well because she wanted them to contact her the second they saw the man and yet she never once identified him or even herself. She just left a burner number. Five-0 thankfully didn’t need much to track a phone and they found her.

Not like that was simple. She pulled a gun, they pulled their guns, and it was mass panic until they identified themselves. They said they were Five-0 and she said she was Sergeant Quinn Liu. She first claimed she was Military Police and then she said she was with CID. Her story was sort of all over the place. She did, however, provide a name for their suspect. She said he was Former Army Ranger, Tom Kendall. He was supposed to check-in and he never did. It scared Quinn because she said he was the second vet to have disappeared on her.

Quinn gave McGarrett all she was willing to give. She wasn’t going to share anything else so they went their separate ways and McGarrett focused in on Kendall. Kendall, as it happens, was dead. It was a bit confusing because the team didn’t know why he killed Sato and they didn’t much about it. All they did know was that he was in contact with someone. They saw a text message from Kendall to what he appears to be his partner and he told his partner to go ahead with the rest of the targets. Leading the team believe the killings weren’t over.

This came as a surprise to Adam. Adam reached out to his old friends in organized crime and no one within the yakuzas or the triads had nothing to do with Sato’s death. His death really came out of the left field for everyone. Adam was still with his “friends” when he met Quinn Liu. She went to the house of one of these men because she believes they were in danger from this second army vet she’s been looking for. The guy’s name was Marcus Sanders. Sanders was still out there and Quinn didn’t want him hurting anyone else.

No sooner did Quin warn this group that someone was hunting one of them, that Sanders started shooting out the windows and killing anyone he could find. Adam took personal charge of Masuto. It was Masuto that was the target and he was also the father of one of Adam’s best friends. Adam wasn’t going to let anything happen to him and he got back up from Quinn. Together they protected Mausto till backup arrived. And so everyone (and that included Quinn) went looking for Sanders.

They thought they got him and unfortunately, he pushed them into killing him. His death meant no one knew for sure why he was killing those people, but they did find a theory when they realize both vets were a part of the same drug trial for soldiers with PTSD. It seems someone used the study to find the perfect contract killers. That, someone, was Mr. Wes Cullen. He was the guy his car was stolen and it turns it wasn’t. Cullen lent his car to Kendall because he had both Kendall and Sanders to kill several men that were part of an old loan shark business.

Cullen had borrowed back in the day when he first started his real estate business. Only the market fell out and he had no way of repaying. He was in trouble and men like Mausto had bombed his car. They thought they were getting to him and in reality, it was his wife in the car with their daughter. So, those men killed his family. Cullen didn’t know their names until one guy came out of prison and that’s when he set about trying to kill everyone that took his family from him.

But with the soldiers now dead, there was no way to move the case forward and they were forced to let Cullen go.

He wasn’t the only one they were letting go. It seems Jerry was quitting because he wanted to dedicated himself to writing his book and he thought he needed to explore himself as well.

It was going to be hard saying goodbye to him but they know that Jerry is happy and that’s all that matters.

Jerry had a goodbye hug with everyone and he even hugged Quinn who eventually came around to the team.