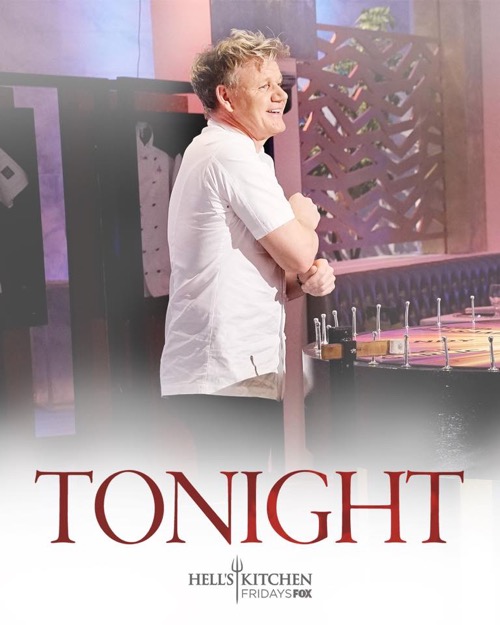 Hell’s Kitchen begins tonight with Trev leaving and Chef Gordon Ramsay asking the blue team, for one of them to volunteer to the red team. Mia talks to Ariel, feeling she can step up and show that she can lead. Ariel pleased that it will be her kitchen versus Mia’s kitchen.

The following morning, the teams line up in the dining room. Bret feels that Ariel would be the dream pick to help the red team; Ariel admits she originally volunteered but Mia agreed to switch and she looks forward to an actual challenge. Bret feels Mia won’t be leading as long as he is there.

Chef Ramsay has photos of the past 5 talented chefs behind him Traci Des Jardins, David LeFevre, Shirley Chung, Richard Blais, and Valerie Gordon. He wants them to move to the next level and which one of them is going to break through to the black jackets; 6 of them and only 5 jackets. The chefs who will get the jackets are the ones who are most successful at 3 difficult challenges. The best 2 chefs of the first round will receive black jackets and the remaining chefs will compete in the second challenge, finally, there will be one big challenge to receive a black jacket.

The waiters bring in a Protein, Starch, Vegetable and a wild card box, they all have to break through the case to see what ingredients they will be cooking with. Bret (pork chop), Kanae (lamb), Motto (salmon), Ariel (scallops), Mia (filet) and Heather (duck). They now punch through for 2 vegetables along with one starch. They each get 1 wild card ingredient to complete their basket.

Heather is up first making pan seared duck breast with purple potato puree. She didn’t let it rest long enough before she sliced and put the puree in the Vitamix. Ramsay keeps asking her why? And makes her taste it. It’s not her best effort and a bit of a mess, just like her jacket. Kanae presents her potato crusted lamb, glazed string beans. He feels it was a delicate dish that was destroyed by the beans. Motto citrus glazed salmon, which is visually beautiful. It is cooked beautifully and the skin is crispy, all he would change is adding more seasoning to the rice.

Ariel prepared pan seared scallops with bacon wrapped celery root. Ramsay says “wow” as he feels she did something pretty magical and definitely one of the strongest. Mia brings up her filet mignon with swiss chard, couscous. He is impressed with her plating but it all about the temperature of the steak. It is a perfect mid-rare and absolutely spots on; saying she did a great job!

Bret produces his dish which is a grilled pork chop creamy polenta and oven roasted sunchokes. Bret calls his dish “man sexy” and forced to explain what he means. Ramsay says it doesn’t look sexy but anemic in terms of color. It is a very good job but he should have reigned in on the garnish. The two people getting their black jackets are Ariel and Mia and the two retreat to the Black Jacket Lounge.

Challenge 2 is what different chefs will do with the same ingredients; using their creativity. They each have to spin the wheel and whatever it lands on, everyone will be using. Heather (Quail). Motto (eggplant). Kanae (baby leeks). Bret (cauliflower). Ramsay says this dish sounds like a nightmare and gives them 45 minutes to complete it.

Kanaa walks up with her dish as Ariel and Mia get to watch from the lounge. He is confused by the dish, saying it looks goopy. It tastes better than it looks, but the hero is the quail and she did a good job. Motto calls his dish “Country Quail Comes to Town!” They think it looks good, but the awkwardness is the raw cauliflower, other than that he nailed it. Heather removed the legs and wings and didn’t use them at all. He feels her using the lemon makes it bitter, but everything else worked beautifully. Bret brings up his dish as Ramsay says he nailed it, the only thing that doesn’t match is the eggplant but it is a bloody good effort.

Ariel and Mia believe Bret and Motto are coming back to the black jacket lounge, but the TV cuts out as Chef Gordon Ramsay reveals that person to be Bret.

Mia and Ariel are happy it is Bret, even though he isn’t their favorite. Kanae, Heather and Motto are waiting for the second person to go to the lounge with the other black jackets and it is Motto, who is escorted away by sous Chef Christina. They are thrilled to see Motto join them in the lounge, feeling he deserves to be there.

Sudden death, Challenge number 3 with Heather versus Kanae, but only one of them will be moving on. Heather is upset, feeling she is better than this and it is conquering her; but refuses to be defeated. Chef Ramsay tells Kanae to keep pushing it.

The final test is a dish that combines two amazing proteins – Surf n Turf! They have 45 minutes to make the dish of their lifetime and given their own opportunity to pick individual ingredients to make it. Kanae is doing an Asian infused dish while Heather is doing the old school classic. Chef Ramsay tells them to make sure they taste everything. Heather suddenly burns herself on a hot pan and runs out of the kitchen, saying she isn’t okay. The medic helps her and wraps her hand, as she feels she is having the worst luck ever, but she is not going home right now.

Heather presents her dish first, as the TV turns on in the lounge, everyone shocked that she burnt herself. She says she did the classic surf n turf, saying she took a step back into the comfort zone as Kanae feels she went backward and won’t prove anything; as everyone says its too plain. Chef Ramsay says the cook is perfect on the steak, but the presentation could be better.

Kanae’s dish is creative, which looks beautiful. She admits she never cooked a dish like this before. Ramsay says what excites him about her, is that she cooks without boundaries. The pork chop is glistening, but when he picks up a piece of shrimp; Gordon wants to know if she cleaned the prawns. She says she did a twist, so they are clean. The pork is delicious but the rice is under seasoned. He tells Kanae she did a beautiful job.

Chef Ramsay says they didn’t make it easy for him to decide, and the TV cuts out in the black lounge room as he congratulates Heather in a nearly flawless dish. The two hug as Ramsay says she left the best for last and a job well is done. He tells Kanae that she may not be ready to be his executive chef but she will go on to do amazing things. She gives her jacket back and says she enjoyed every moment of being there. The black lounge thinks it is Kanae coming in but disappointed to see Heather, who says no one looks happy.

Gordon joins them in the lounge and congratulates all 5 of them, saying the next time he sees them is in the black jacket service and it needs to be perfect. Heather promises perfection from here on out and will cut anyone’s throat out and stomp on it to get anywhere she needs. Two rookies and three veterans are the final five!!