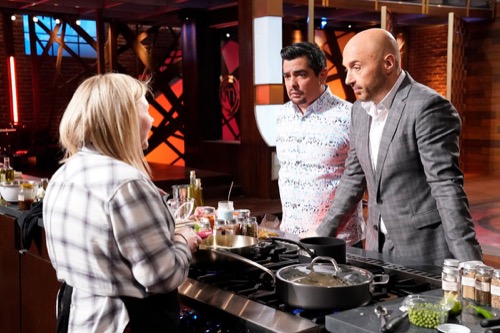 Tonight on FOX Gordon Ramsay’s Masterchef returns with an all-new season on Wednesday, June 12, 2019, season 10 episode 3 called “Gordon’s Mystery Box,” and we have your weekly Masterchef recap below.

On tonight’s Masterchef episode as per the FOX synopsis, “Competition kicks off for The Top 20 with a culinary boot camp to weed out the cooks from the chefs. For a chance for immunity, the chef-testants’ skills are put to the test in a quick-fire evaluation of their culinary expertise. Then, the home cooks face their first mystery box challenge of the season, in which they will make a dish inspired by Chef Gordon Ramsay or be at risk of elimination.”

The home-cooks have each earned an apron and now they have to fight not to lose it. Their first challenge was a Culinary Bootcamp. Chef Ramsay gave the contestants a lesson on how to cool the essentials. He showed them the proper way to chop vegetables, work with fresh ingredients, and even flay a fish. There have been a few times in the past where the home-cooks made it far in the competition to only fail at the essentials. So no one wanted that again! Ramsay showed them everything and that includes yoking an egg. That last part was especially crucial because there was a practical exam at the end of this. And seeing as it was the first big challenge, no one was going to make it easy on these home-cooks.

Another reason why the judges were coming down hard, in the beginning, was because the practice was in itself an Immunity Challenge. The contestants were given ten minutes to dice three onions, fillet a fish, and separate three dozen eggs and the fastest hand that managed to do everything properly will have won themselves immunity. No one wanted to cook in the Elimination Challenge and so they were a few that took shortcuts. Some tried to go too fast. They ended up missing meat on the fish and their pieces of onion were too big. There were a lot that failed their first challenge and so they knew they had to cook later. Evan though chose to be unique because he tried to argue against the judges’ decision and their decisions were literally based on what they could see.

Evan soon learned when to be silent and may he remember this lesson the next time he’s judging his fellow contestants.

Evan joined nine others as they cooked as they received their first Mystery Box. Their Mystery Box was not just one protein, but a choice of three proteins that Chef Ramsay loves to cook with. This was the tenth season after all and that meant ten seasons of Gordon Ramsay. The contestants had to cook with him in mind and if they were actually doing this then they would have cooked two of the proteins before picking the winner at the end. It’s what Ramsay would do. Its also a great strategy and so it was a shame only one chose to it. Just one person realized that they should hedge their bets and he chose to cook with the scallops as well as the pork. He was a vegetarian and so he had to taste his food and then spit it back out again. And that showed commitment!

Wuta also left things at the last minute. Which was a downside, but he pulled through and it turns out there was one other person that chose to cook with two proteins. Dorian decided to play it safe as well and so she was the first to get her apron back. The contestants had to go back to wearing the black apron for this challenge and that alone might have disheartened them. Deanna was all over the place because, Evan’s sauce wasn’t to taste, and Kenny failed on several fronts. He didn’t taste the scallops before cooking them nor did he wait to cook them until the final two minutes like he was supposed to. He sort of just rushed into cooking with no plan and it showed. Kenny’s dish was one of the worst looking ones and it was in front of Joe.

Wuta also landed in the bottom five and boy did that come as a surprise. The man put pork in his mouth to taste for the competition and it was his scallops that let him down. Unfortunately, the judges went on to reveal that they were going to be sending two people home and so that made the bottom five nervous. The first dish that was called up for another taste test was Deanna’s. She cooked Pan-Seared Scallops with Blood Orange & Fennel Salad and Mashed Potatoes. The idea behind combining salad with mashed potatoes was skewed. It resulted in a bizarre taste combination and the judges called it senseless. They advised her to taste her food next time because she had been onto something with the Blood Orange.

Liz was called next. She cooked Herb Crusted Lamb with a Caramel Potato and a Mint Pesto and it was great for the most part. It was just the caramel potato that left everyone confused. Liz learned about it in Luxembourg and maybe that’s where she should have left it.

Evan was called next. He cooked a Harissa-Rubbed Pork Chop with Smashed Fingerling Potatoes and Cipollini Onions. It looked horrible on the plate because there were no plating skills used in the making of this dish and so the judges called it a Season Five dish. They enjoyed the flavors, but not the look of it.

Then there was Kenny. He cooked Pan-Seared Scallops with Mushroom, Roasted Potatoes, and Mushy Peas. His dish was another ugly thing that no one could stand the sight of. Joe said that it looked like fungal infection and again his dish tasted great though the look of it was what the judges hated.

And finally, there was Wuta. The reason his overthinking didn’t work to his benefit was that his dish looked ugly and he overanalyzed it. He cooked Pan-Seared Scallops with Fondant Potatoes, Pea Puree, and Sautéed Mushrooms. And it looked horrible because there was no cohesion. It just looked like several different things thrown together on a plate and the judges admitted that his pork would have been better!

The judges considered everyone in the bottom and they realized that they had no choice but to eliminate Deanna and Kenny because certain things just can’t be taught!