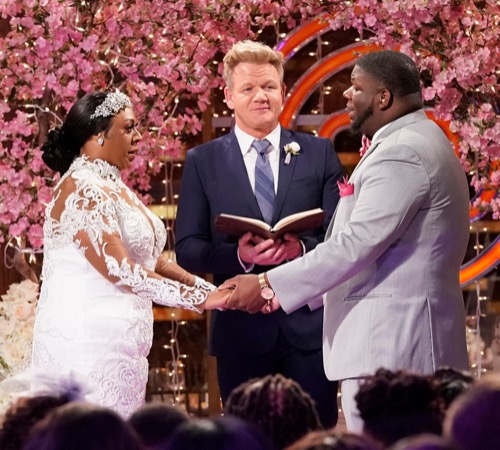 Tonight on FOX Gordon Ramsay’s Masterchef returns with an all-new episode on Thursday, July 17, 2019, season 10 episode 10 called “Gerron’s Wedding,” and we have your weekly Masterchef recap below.

On tonight’s Masterchef episode as per the FOX synopsis, “The Top 14 home cooks fight for immunity in another team challenge. Split into two teams, the captains scramble to lead their respective teams to success by preparing 45 meals in only 90 minutes for a very special event: a wedding to be held in the MASTERCHEF kitchen.

Even more daunting, the wedding’s groom is MASTERCHEF season nine champion, Gerron Hurt. See which team will wow the bride, groom and guests with their creations and which team will face elimination.”

The contestants were in for another Team Challenge. This time they were catering a wedding for one of MasterChef’s alumni. Gerron won his season with his southern take on fine cuisine and now he was marrying his sweetheart. He was going to want the best for his future wife, but things went a little off the rail when the captains were chosen. The judges picked Bri and Wuta for this latest challenge. Bri could speak up for herself and she picked a strong plating team. Wuta, on the other hand, has this thing where he fades into the back even with his own team. Like he didn’t pick anything that they were going to cook. He left that to his team to figure out and so they found a balance on their own.

Wuta was probably the weakest on his team. Bri’s weakest member was Subha and that’s because everyone knows Subha panics in the kitchen. He reassures people that he has it and then when it comes to crunch time, it turns out he never had it. There was also a second issue with Bri’s team. She got stuck with Subha because he was the last person chosen and so her only mistake was in the strong personalities she brought together. Renee and Sam but heads the second Bri told everyone what they were going to cook. Bri came up with the menu plan and afterward everyone else fought about who gets to do what. Sam believed he knew best how to cook the meat. Hence he tended to talk over other people.

When Renee tried to do the same, Sam interrupted her and asked that she let him talk. Sam’s problem is that he could be pretty arrogant in the kitchen. He likes to do things his way and he ignores what everyone else is telling him. Renee never got a chance to defend her position. Her opinions were pushed to the side and that made her feel like she wasn’t wanted. Renee went on to keep her own counsel after that and no team is really a team when someone feels like they aren’t allowed to talk. This all happened in front of Bri and she said nothing. She went with a man’s perspective on meat and she continued to do so as Sam and later Nick made several mistakes. They seasoned the meat and then proceeded to waste time tying it with string.

Renee tried to say something when she saw that. She brought it to Bri’s attention and Bri ignored because she thought the men had it, but she realized her mistake when she brought a taster plate to the judges and they found string in their meal. They told her that was a costly mistake and they also had several other critiques. The one highlight was that the flavors were all there and so Bri just tightened up her ship. She removes all the strings and her next mistake was to take Renee off meat. Renee was the sole person on the meat station that seemed to know what she was talking about. So when she was pushed to the vegetable station, she said that Bri couldn’t take advice. She also brought up how the last time she was taken off meat was when her team lost.

Renee must have forgotten how she much she messed up when she was on meat with another Team Challenge. She failed to season it right and she was delivering raw meat. It was odd how easily she forgot why she had been removed the last time and the only excuse for it was that she wanted to feel rejected. Renee even took offense with the vegetable station. She wanted to do the asparagus one way and then got upset when Bri wanted to do it another way. Bri was the captain and so she called the shot. It shouldn’t have offended Renee and yet it did. She also became very prickly. She would get an attitude and never wondered why no one wanted to work with her. And so that got to be annoying after a while.

Shari tried to talk to her. She was even willing to leave her station for a minute to help Renee get whatever she needed off her chest and she has abruptly pushed away. Renee created a lot of problems in the kitchen and the one time she was right was with the meat. She didn’t think the guys would cook it right and she was right. They started to hand out raw meat. None until Ramsay and so they all got yelled at. Ramsay basically had to take over. He didn’t trust the guys because they failed to do what Bri suggested and use a meat thermometer. It was such a basic thing that Ramsay felt they were all idiots for not doing it. So he took over and he pulled other people off plating in order to focus on cooking the meat.

The Blue Team were soon back on the right track and there was someone working with Subha just to cover for Subha’s mistakes. It was literally the only thing they could do and so they made it work. Now, the Red Team had also fallen apart. Wuta’s laidback attitude meant everyone was making mistakes and no one was watching them. They had needed a captain and so Wuta was eventually ordered to lead his team. He changed up the method that the others came up with. It was Jamie’s idea to cut a lobster in half when usually everyone eats the lobster tail and so that was one of the things that changed. Only pulled out lobster tail wasn’t easy and five people had to be pulled from other stations just to get it done.

Afterward, when the dishes had been served, there were plenty of people that complained about the lobster. There were so many dishes where the lobster was raw that people couldn’t enjoy it. The people back in the kitchen wasn’t getting this feedback and so Wuta was actually proud of himself. He tasted the lobster and thought all the lobster was cooked through. He even patted himself on the back. And so it was an eye-opener when the Blue Team won this challenge.

The Red Team didn’t know where they went wrong, but the judges told them that the lobsters were raw and so Wuta rightly blamed himself.

The Red Team changed gears so many times that they fell behind and couldn’t recover ground.

They’ll be cooking in the Elimination Challenge tomorrow because of their poor showing tonight.