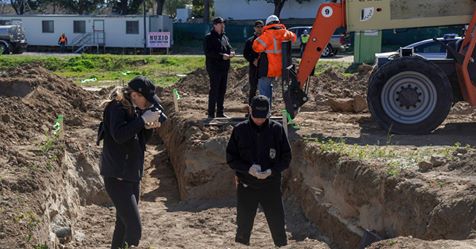 Tonight on CBS NCIS returns with an all-new Tuesday, April 16, 2019, season 16 episode 20 called, “Hail & Farewell” and we have your weekly NCIS recap below. On tonight’s NCIS season 16 episode 20, “Hail & Farewell,” as per the CBS synopsis, “The team investigates the murder of a Marine Major believed to have been killed in the 9/11 attack on the Pentagon after human remains are discovered at a construction site.”

A construction crew found human remains at their work site. The site was being turned into luxury condos and it had been a vacant lot for years beforehand, but the crew knew they needed to call it in and they made sure to contact the right people when they noticed the uniform the victim had been wearing. It had been a Marine’s uniform. The uniform and the dentals that were taken at the scene proved that the body was that of Marine Major Ellen Wallace. Wallace reportedly killed on 9/11 during the attack on the Pentagon. She worked in the building and disappeared that very same day. No one thought anything of it because there were plenty of bodies that haven’t been found yet and so no one questioned Wallace’s disappearance.

Wallace even received extra attention from the media because she was the daughter of retired Marine General James Wallace. Wallace was a big name back then and he still was. He was a guest lecturer at the Military College and he was known to Gibbs. Gibbs was engaged to Wallace and he held great respect for her father. Its why he wanted to break the news himself. Gibbs went to the college and he spoke to General Wallace about what they learned. The man’s daughter was found miles away from where she was allegedly killed in a terrorist attack and unfortunately only one of the things had been untrue. Wallace had been murdered. She fought her attacker and had been killed when she suffered from blunt force trauma.

Someone also took lengths to cover up her death and so Gibbs couldn’t tell the general much. The man had wanted a name because before he couldn’t just blame one person before and now he could. He wanted to know who killed his daughter and he said that this person has been getting away with their crime for eighteen years, but Gibbs said that they were going to them and that’s all he was willing to say about an ongoing investigation. Gibbs didn’t return to his team and tell him about his personal connection to the victim so the team had to piece that together themselves. They found photos of Gibbs with Wallace and they were going to ignore it at first until they found evidence they couldn’t ignore.

There was blood on Wallace’s clothes and that blood belonged to Gibbs. Gibbs needed to be questioned about his involvement with the victim and so his own team threw him in an interrogation room. Sloane volunteered to talk to Gibbs and she got answers from him. He was asked about the blood and he explained he had injured his finger while he was building his boat. It hadn’t been much to him and Wallace had stepped in to clean it with her uniform. Gibbs was also asked about his relationship with Wallace and he said that she was an ex. They were together and then Gibbs broke it off. He didn’t think he was admitting anything and so that’s when Sloane said this relationship didn’t follow the standard.

Gibbs never ended things. He would wait until his significant other had enough of him and she would be the one to walk away, so Gibbs saying he called it quits wasn’t the usual. It must have meant that Wallace had been different. She was someone that got close to him and with her, it was him that ran away scared. Gibbs was asked about her and he chose to walk out rather than answer. McGee tried to stop him and when he couldn’t he told the other man that he was off the case. McGee didn’t want to do it and he only did so because it was a procedure. He and the team needed to clear Gibbs’s name before he could be allowed back onto the case and to do that they asked someone to get the files on the Pentagon.

They wanted to know when Wallace went in and when she came back out. They had to bribe their resident expert with tickets to Comic-Con and only then she says that Wallace never left the building. She went to work on the tenth and that was the last time anyone saw her alive. No one saw her on the morning of the eleventh and the team believed that she did, in fact, die there, but then someone moved her body and they wanted to know who. They were allowed to bring Gibbs back in because he didn’t have Pentagon clearance to get into the building and this meant he was no longer a suspect. He was still asked about the last time Wallace called him and he said that he didn’t answer the phone because he thought she was going to talk about getting back together.

Gibbs has been feeling guilty about ignoring that phone call for almost twenty years and that’s why he didn’t want to discuss it with the team. It wasn’t because he was hiding anything and so there was no need for Gibbs to sit out the rest of the investigation. He just wasn’t sure he wanted to come back. He was still going through some things and so the team followed the other leads they had. They found out that Wallace had a secret email and that she used to it set up rendezvous with one person. This person, Mr. Morrison, was a journalist. He was asked about Wallace and he admitted that they had been working together. Morrison said that they had been working to see if American soldiers were responsible for a raid that killed several civilians in Kosovo.

The soldier that was in charge of the Americans at that time was General Wallace and so Gibbs went back to him to ask about it, but it turns out the general knew what his daughter was doing because he asked her to do it. The general would never have ordered a raid and he had been hearing rumors. He wanted to know if someone did kill a bunch and if so who was it. The team investigated the whole thing and unfortunately, they found out it had been Daniel Kent. Kent served the general in Kosovo and became a close friend. He and his fellow Marines got drunk and they cause multiple causalities. Kent then tried to hide it from the general and so when the news came out some other way – Kent tried to kill the story altogether by killed Wallace

Wallace was buried in the empty lot not far from his old apartment and the team already had evidence on the Kosovo matter. So they were able to arrest Kent and they finally got justice for Wallace. She was later buried and the general had an easier time of saying goodbye hat Gibbs did.

Gibbs said nothing good ever came from him loving someone and this has only reaffirmed that for him.