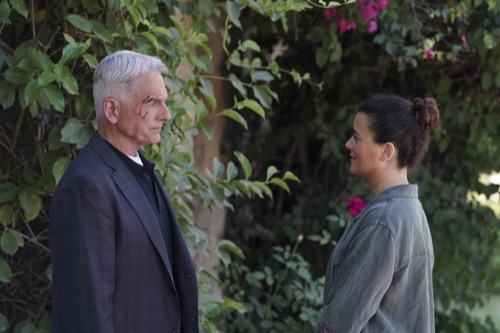 Tonight on CBS NCIS returns with an all-new Tuesday, October 1, 2019, season 17 episode 2 called, “Into The Light,” and we have your weekly NCIS recap below. On tonight’s NCIS season 17 episode 2, “Into The Light,” as per the CBS synopsis, “With their lives in danger, Gibbs and Ziva’s rogue investigation takes an unexpected turn when a possible terrorist plot is revealed.”

Ziva came close to crossing a line. She was prepared to kill Sahar if it meant eliminating a threat and she would have gone through with it if it hadn’t been for Gibbs. Gibbs managed to reign her in. He convinced her that it was better to turn Sahar into the authorities and they later commandeered a sheriff’s office because they wanted to question her officially. The sheriff was okay with it, Gibbs was okay with it, and Ziva was eventually brought on board. Ziva was willing to let Sahar live if it meant she could reunite with her family.

Ziva wanted her daughter back more than anything. They’ve been separated for the last couple of years now and Ziva wasn’t even sure if her daughter would remember her. Talia was practically a baby when they split up. Since then, Talia became a toddler and may or may not be in preschool for all Ziva knew. Ziva needed to be over in order to get her daughter back. She just didn’t have the time to play Sahar’s games and that’s all Sahar seemed ready to do. Sahar saved her own life by saying if she dies that a senator will die next.

Sahar refused to which senator was the target. Both Ziva and Gibbs tried their own unique form of questioning and nothing got through to the prisoner. Sahar didn’t want to reveal a single thing. She wanted to make the teamwork for it and they tried. They tried to figure out Sahar. They learned that she was close to taking over at Hamas and that alone was something special. Women didn’t really rise to power in the Middle East. It must have taken Sahar everything to make it that far and she could be resentful on why she lost it all.

There was American involvement. They knocked her off her throne and she soon ended up as a POW in Syria. It was where she was tortured and nearly killed, so it would be understandable if she wanted revenge? The team just couldn’t figure out why she was targeting the people she did. They caught on that Sahar wanted to hurt Ziva because of something Ziva’s brother Ari did and they have no idea what happened. They also couldn’t figure out which senator she was targeting. The closest bit of information they got was when they learned there was an attempted assassination.

Some suicide bombers attempted to sneak into an event for senators. There were probably thirty senators in all and so there was no way to narrow it down. The team ended up putting everyone in protective custody while they worked things out. They went back to Sahar and again she refused to be broken. In fact, she appeared to enjoy the chaos she caused. The whole city was lockdown because her and suicide bombers started coming from everywhere. There was a second bomber that was killed right before he detonated.

Palmer was lucky enough to perform the autopsy. He later told Gibbs that the identifying marks on the body (such as the tattoos) showed that the bomber was a white supremacist and that just didn’t make sense. What would a white power guy want with a middle eastern woman? Sahar was clearly running the show here and it simply didn’t make sense why she would work with those guys or how they would even have to come to have met her? It was all a little too confusing and Ziva was smack dab in the middle of it.

Only Ziva wasn’t like how everyone remembered her. She’s been on the run so long that she saw everything and everyone as a threat. She nearly took off McGee when he tried to hug her. Ziva was constantly on edge. She was also used to working alone and that’s why she seemed standoffish with her old friends. McGee couldn’t reach her and neither could Ducky. She still holds a special place in her heart for them however she’s jaded now because of what happened to Gibbs. Gibbs was left several clues that she was alive. And never once came after her.

Ziva thought he would avenge her or at least look for her remains. Gibbs surprised her when he let her go and so she lost faith in him. Ziva didn’t trust Gibbs now. She bugged their offices because she wanted information first and she didn’t want to go through the team to get it. Ziva offended everyone when they found that bug. It made what they found to take a backseat and instead they focused on whether or not if they could trust Ziva. She was too used to her own company now. Her mistrust and her antics were alienating her.

Ziva was off doing her one-woman-routine as the team was getting information on Sahar. Sahar used backchannels to fund militia groups and the plan worked because none of them knew of her involvement. Sahar even funded fake suicide bombers. The bombs were real. It was the bombers that didn’t know what they were doing and were therefore pawns. It seems their jobs were to act as distractions. It was up to them to keep Metro police distracted and the real show was supposed to happen under everyone’s noses.

If that wasn’t enough, Kasie also found that Ducky’s phone was used to contact Sahar’s people. It initially seemed like Ducky and Sahar were in cahoots and so right away Kasie knew there was something wrong. She suspected someone used Ducky’s phone. She even asked him about it and he told her that Ziva had borrowed his phone. He had just seen her after so long that he was willing to give her anything she asked of him. This included his phone and he thought she needed it because she wanted to make a call that couldn’t be traced back to her.

Now, things look differently. The team knew Ziva bugged them and now they were learning she was reaching out to Sahar’s people. There could be a logical explanation and then there was what Kasie was thinking. Kasie thought Ziva was working with Sahar. This wasn’t helped by the fact Sahar later escaped police custody and was currently on the loose. Taken altogether it looked like treasonous collusion and so the team questioned their last link to Sahar. They questioned her inside man, and he ended up telling them her the whole story.

It turns out Ziva was working with Sahar. Sahar agreed to give Ziva’s life back in exchange for helping her and Ziva agreed to do it. Ziva mostly agreed to get Sahar’s money back for her. Remember, Ziva tried to take Sahar down when she realized Sahar put a contract out on her life and so she practically depleted all of Sahar’s funds. Ziva nearly destroyed Sahar’s organization altogether. She was a few steps away from it all when she came to his agreement with Sahar and she said she would return all of the money she slowly stole from them. And that’s when the team walked in.

They saw Ziva fulfilling her part.

Ziva did get Sahar’s money back, but she also alerted Interpol and was finally toppling Sahar’s empire. Sahar didn’t realize what was happening until it was too late. She then chose to commit suicide rather than go back to jail and so that’s what most of her men did. They chose to die before being imprisoned again.

And because Ziva helped take them down, she was free and clear and that meant she can go home to her family.

And it also showed that a little bit of the old Ziva was still there.