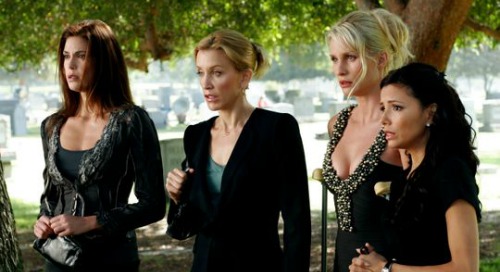 Nicollette Sheridan is slamming her former Desperate Housewives co-star Felicity Huffman for her very desperate behavior. The actress has gone on the record to call Huffman’s involvement in the college scam disgraceful, among some other things.

During an interview with Access Hollywood to promote her new role in the television series Dynasty, Sheridan made it pretty clear that she’s not standing behind her former co-star or offering any words of encouragement.

Huffman, along with Hollywood actress Lori Loughlin and about 50 other parents, have been indicted on charges connected to a nationwide college admissions scandal. Many high-profiled and wealthy parents paid thousands of dollars to help their children get into college or cheat on admissions exam.

Sheridan said, “We don’t know the facts. But we could be extremely disturbed by the entitlement, the power, the money that could take away from those less privileged and that to me is disgraceful. I think there are ways to remedy a system that isn’t working and that I think has been broken for a long time. It’s troublesome, it’s troublesome because it could change the life path of a child that is deserving.”

Huffman’s good friend David Mamet wrote an open letter to the actress, criticizing her and her husband William H. Macy for their involvement in the scandal. The playwright also called the scam a “corrupt joke,” adding that Huffman’s “zeal for her children’s future may have overcome her better judgment.”

Meanwhile, Lori Loughlin’s former Fuller House co-stars seem to be standing by her side. Actor John Stamos, who plays Lori’s husband on the series, said he had no comments when asked about the scandal outside a Hollywood restaurant after the news broke last week.

Actress Jodie Sweetin also refused to make any comments about the scandal when TMZ caught up with her after her flight at Los Angeles International airport last week, too. Both the Hallmark network and Netflix’s Fuller House severed ties with Loughlin.

Reps for both Huffman and Loughlin have refused to make any comments to the media. In the meantime, check back with CDL for all the latest news and updates on your favorite celebrities right here.