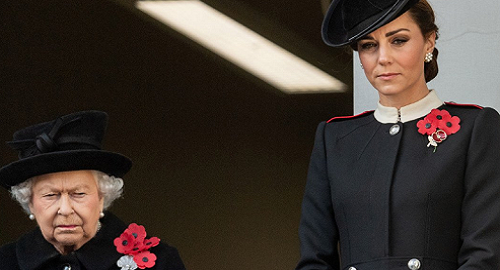 Apparently, Queen Elizabeth was none too pleased with Kate Middleton showing off her crown jewels and couture dresses during the first few years of her marriage to Prince William. In fact, a royal biographer claims that the Queen of England made it pretty clear to the Duchess of Cambridge that she wasn’t happy with her frivolous display of wealth in public.

She wrote in her biography, William and Harry, “If [Kate] was not with William at Balmoral then the couple were skiing or holidaying on Mustique. Kate was there so often the press dubbed her ‘Queen of Mustique,’ a title that had previously belonged to Princess Margaret. Swanning from one five-star holiday resort to another is not the prerequisite for a young woman possibly destined to be Queen.”

It has also been reported that Kate Midleton was supposedly “stung” by the Queen’s criticism. Although it hasn’t been confirmed, Queen Elizabeth’s choice words might be the reason why Kate Middleton has transformed herself into the “Queen of repeats” as she often recycles some of the same outfits that she has worn in public.

As a matter of fact, many royal observers have noticed that the Duchess of Cambridge likes to repeat a lot of her favorite coats, jackets, shoes, and accessories during her royal engagements and public appearances, despite the fact that many fashionistas often look forward to seeing what stylish pieces Kate is wearing whenever she’s out and about.

Of course, this hasn’t been the first time that Prince William and Kate Middleton have been criticized for their luxurious and lavish lifestyle. Several years ago the Duchess took a private helicopter from Norfolk to London when the Queen took the same trip via train.

What’s more, many royal critics have noted that the Duke and Duchess of Cambridge spend more of their time vacationing to luxurious destinations than actually doing any real work.

In fact, it’s often been noted that William and Kate are usually on the bottom of the list whenever it comes to the royal engagement work count list compared to other senior members of the monarchy.

So far Buckingham Palace has not made any comments about the report. Check back with CDL for all the latest news and updates on Prince William, Kate Middleton and the rest of the royal family right here!