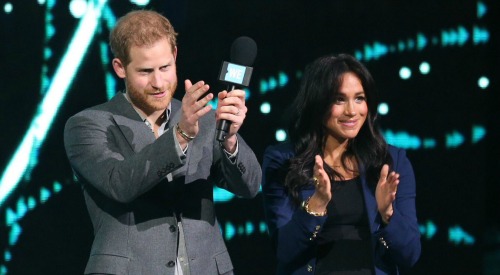 Queen Elizabeth has vetoed Prince Harry and Meghan Markle’s plans to begin their own philanthropy brand. The Duke and Duchess of Sussex were hoping to branch off on their own with a new global initiative. Unfortunately, the Queen of England put a quick stop to it.

According to Page Six, Prince Harry and Meghan Markle, who is currently pregnant with the couple’s first royal child, were hoping to set up a global philanthropy brand. They were hoping to run this completely on their own and without any oversight from Buckingham Palace.

The royal couple wanted their household to be entirely independent from the palace. Queen Elizabeth quickly vetoed the idea, making it clear that Harry and Meghan “can’t just go off and do their own thing.”

With that said, the Duke and Duchess of Sussex will be having their own office nonetheless. Up until now, Harry had shared a household with Prince William. Officials connected to the palace suggest that the break is actually a good thing and not part of any long-running feud between the two brothers.

Instead, this will allow William and Harry to have a little more control over their different royal responsibilities, under the watchful eye of Queen Elizabeth, of course.

There’s speculation that Harry and Meghan want to do “their own thing,” in order to give Meghan more of a say in the work that she does. Before marrying into the royal family, the Duchess of Sussex often traveled to many parts of the world with several different charities and organizations.

Meghan Markle was also a very vocal eco-minded actress in Hollywood who often expressed her thoughts and concerns over feminism and other hot button topics. Meghan wrote about her opinions on her now defunct lifestyle blog, The Tig.

So far Prince Harry and Meghan Markle have not made any public comments about their future plans or initiatives. Meghan is set to give birth at the end of April 2019. In the meantime, don’t forget to check back with CDL for all the latest news and updates on Prince Harry, Prince William and the rest of the royal family right here.