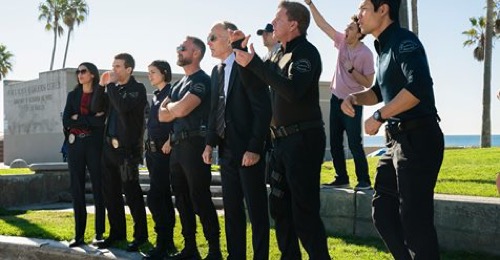 Tonight on CBS their new show S.W.A.T. inspired by the television series and feature film airs with an all-new Thursday, February 07, 2019, episode and we have your S.W.A.T. recap below.  On tonight’s S.W.A.T. season 2 episode 14 called “The B-Team” as per the CBS synopsis, “Hondo reunites with an old flame, FBI Special Agent Elle Trask, when the SWAT team works with the FBI to bring in a separatist group with weapons-grade plutonium. Also, the SWAT team worries they will lose an annual law enforcement charity competition to the Los Angeles Fire Department.”

The whole SWAT unit was disheartened when LAPD lost to LAFD in the annual charity basketball game. There were still a few more events in the competition before an official winner was declared. Therefore, SWAT thought they could make a comeback with the arm wresting portion and so that when they were informed by a very happy Fire Chief that their department has a new employee. The guy was former NFL and had been hired to win the competition. It wasn’t fair to LAPD though there was nothing they could do about it. Luca had taken one look at the guy he had to arm wrestle before considering he might take the day off and so no one was in the mood when SWAT got the call. They responded to a hostage situation and unfortunately for them their report was kinda all over the place.

SWAT relied on witnesses to determine how many people are in the building, but some were claiming to have seen four hostages and others were claiming three. Hondo had asked his team to get out their new machinery that could see through the wall. It was a brand new tech and luckily for everyone it wasn’t that hard to understand. The machine read body temperatures and it showed that the perp had three hostages. SWAT came in from the back and they saved the hostages while they had been forced to kill the perp. He had the chance to give himself up and he chose to die because he said his cause was worth it. The perp was later identified as Tomo Yara and the “cause” was the Okinawa separatist movement.

Okinawa was serious of islands that were mostly known for housing a US Military base. The native people of Okinawa feel like the rest of Japan looks down on them and that’s why they want to govern themselves. They wanted their own government and all foreign power to be gone from the islands. It didn’t make sense why Tomo had joined the movement because he was from the US, but they did know that this movement has become violent because of a rich benefactor. The benefactor was seen meeting with a research assistant at a chemical lab and unfortunately assistant had a good lawyer that allowed her to skate questioning. And so SWAT didn’t know what they were dealing until the FBI came to them.

FBI Agent Elle Trask came to LA to inform SWAT about an imminent threat. She had an informant inside of the separatist movement and she knew that this benefactor had gotten his hands on some plutonium. There was enough of the stuff that the benefactor shipped all to LA where he probably hopes to ship it back to Okinawa. The belief is that the separatist wanted to bomb the base and so SWAT was asked to retrieve the plutonium from where the informant claimed it was, but they hadn’t been given the right blueprints of the building and so the bad guys and the informant got away with the plutonium. It begged the question of why ask for their help if they were going to be given blueprints that didn’t show a backdoor?

The FBI later had their excuses. They said that they wanted the informant to get away with the money man in order to keep his cover, but it seems they never really wanted SWAT’s help because they didn’t like it when SWAT tried to complain and so Hondo’s unit was given a door-to-door assignment. They were told they weren’t needed because FBI agent running things had brought in his A-Team. He considered SWAT to be the B Team and what that agent didn’t know was that Elle would help Hondo. Hondo and Elle used to date fifteen years ago and it ended badly when Hondo broke up with her via text. He still didn’t think Elle would do him wrong like that and so he was eventually able to win her over after he said he’d protect her informant.

Elle believes Tanaka would have contacted her by now and so she was concerned when she didn’t receive word. She was told by her bosses he was most likely dead, but Elle didn’t want to believe it and so she agreed to help SWAT track down the plutonium. The first place they looked was in the drop-off Tanaka had with Elle and it gave them some signs but not as much as Tomo’s family who revealed the real reason why Tomo joined the movement. His cousin had been raped by an American private contractor and it had been hushed up. The government and the Americans didn’t want the embarrassment and so they paid off the girl’s family. And as for the girl herself, she’s never been the same again.

Tomo did admit plans to his brother and from there SWAT was able to rush LAX airport. They found Tanaka beaten up in the bathroom, but they caught the henchmen and most importantly they got the money man before he could transport that plutonium.

Plus, Luca had nothing to worry about because he still won that arm-wrestling match and they all raised a lot of money for Breast Cancer.