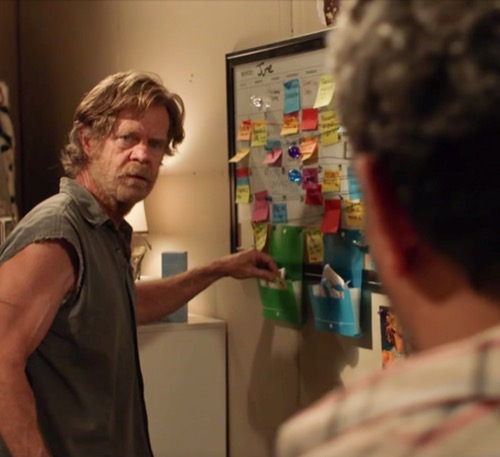 Tonight on Showtime the uniquely twisted and highly entertaining show Shameless returns with an all-new Sunday, December 1, 2019, season 10 episode 4 called, “A Little Gallagher Goes A Long Way,” and we have your weekly Shameless recap below. On tonight’s Shameless episode, as per the Showtime synopsis, “Frank and Mikey set off on a day of adventure around the city in pursuit of Mikey’s dreams.

Debbie discovers a new way to make money in the midst of a strike as Lip leans on his new friend for parenting advice. Carl gets more than he bargained for when he offers to help Anne. Liam grows suspicious of his seemingly perfect mentor.”

Tonight’s Shameless season 10 episode 4 is going to be great, and you won’t want to miss it. So be sure to bookmark this page and tune in for our coverage of Shameless tonight between 9 PM – 10 PM ET! While you wait for our recap, make sure to check out all our Shameless spoilers, recap, news & more, right here!

Tonight’s episode of Shameless opens with the aftermath of Frank’s party and it is terrible. Frank has money in a Kentucky Fried Chicken bucket, Debbie takes it and tells him that it is hers. Mikey is having a hard time getting out of bed, Frank helps him to get out.

Debbie tells Liam that she is on strike. Lip comes in with the baby and tries to get some milk, but it is sour.

Frank takes Mikey to a fountain so they can scrape up all the coins. Mikey points out some businessmen, he tells Frank he wants to be like them, he went to college. Frank asks him what happened. Mikey bought a Blockbuster store with his dad, he lost everything and his father commits suicide. Frank has a baggie in his hand, he rolls up his jeans and starts to take money out of the fountain.

Lip is in a new parent AA support group. Carl is with his new girlfriend when immigration officers knock on the door and ask her for identification. Carl tells them they are racial profiling, but she gives it to them and they leave.

Frank is out shopping with Mikey, he picks out a suit for him.

Liam comes out of the house, Mavar is there to see him that his great-great-aunt died in her sleep and would be great if he attended the homecoming at the funeral home. Mavar tells Liam to have a great day and leaves.

Frank and Mikey are both dressed in suits, they head to a breakfast buffet at a hotel, disguised as businessmen.

Debbie is out shopping for groceries when Megan bumps into her. Megan has four kids, Debbie asks how she can afford to feed them, she says child support. Megan notices Franny’s clothes and tells Debbie that she should be going after the father as well, milk him for everything she can get.

Lip makes a new friend at the group meeting, the two are walking down the street and talking.

Frank and Mikey pretend to talk business, Frank says it is time to make their move. Two men get up and go to the buffet, Frank and Mikey grab their briefcases, leave and get in a cab.

Liam is at the bar, talking to Kevin. Liam tells Kevin and V about Mavar, and ask what do they think he wants. Liam goes on to say that Mavar pulled a quarter out of his ear. Kevin tells V that Mavar is obviously trying to lure Liam into some kind of a cult.

Debbie goes to see Derek, his wife tells her that he is dead and she is not welcome there.

Anne and Carl are at the restaurant, Anne has a problem and needs a place to stay, Carol says she can stay there.

Liam is spying on Mavar, he goes to his office and asks him if he is in a cult. Mavar tells him that he sells used cars. Back at the bar, Mimi is frustrated with doctors, V tells her to get in through the office manager first and she will get through.

Anne and her whole family move into the house, Debbie walks in and tells Carl that Derek died. Carl tells her there should be a death benefit, Debbie takes the information and leaves.

Frank and Mikey found passes for an event, “the art of self-promotion,” and are in line to enter the event. They walk around the event, there are some freebies for people who attend, but the two grab much more. The two get phots taken, then share a free beer. Frank and Mikey get into an argument over a water bottle; Frank hits Mikey in the chest and he starts coughing, Mikey says he is sorry – the two make up.

Debbie goes to a military officer, she finds out that Derek’s benefits were paid out and if she wants more information, she needs to speak to the widow. Debbie returns to Derek’s house and tells Peppa she is sorry that she didn’t offer her condolences. Debbie tells her that Derek’s benefits should go to Franny, his daughter. Peppa tells her that Derek was right, she is a terrible person and slams the door in her face.

Mimi returns to the bar, she tells V that she is a genius; her plan worked. Then she offers V a job to take over all her African American clients.

Debbie meets up with Megan and her friend Patty, who she is going to enlist to help her get her money for Franny.

Frank and Mikey are at a hotel bar, Mikey orders two gentleman jack, Mikey says it his treat. Mikey tells Frank he saw someone with a shirt the other day, it said life is good. Mikey then says that the day was his best ever, and he is going to miss him; he wants to go back to prison to get real health care; the best health care the country provides to poor people. Frank says he is sorry.

Liam is at the wake for his great-great-aunt and takes contributions for fresh flowers to put on her grave. Liam goes to leave, Mavar follows him out and says he is proud of him. Liam says he is keeping the money. Mavar is upset, he tells Liam that the nicer he is to him, the meaner he is back. Mavar shouts that family is everything, and screw him. Mavar says that he hates Gallaghers, they bring out the worst in everyone.

Tami shows up at the Gallagher’s, Lip is happy to see her, she reunites with her baby. Kelly then shows up and is surprised to see how many Hispanic people are in the house.

Frank and Mikey leave the bar, Frank tells him that they can get jobs, they will save up so he can get dialysis every week, he will even stop drinking. Mikey says that he is sick, he can’t do the hustle anymore. Frank tells him that when he was getting dialysis, he prayed. Mikey says that he really hopes that his last day on earth will be with him and kisses Frank, then he walks away. Mikey walks towards a police officer, tells Frank he has a ride, hits the officer in the face and is soon handcuffed and put in the car.