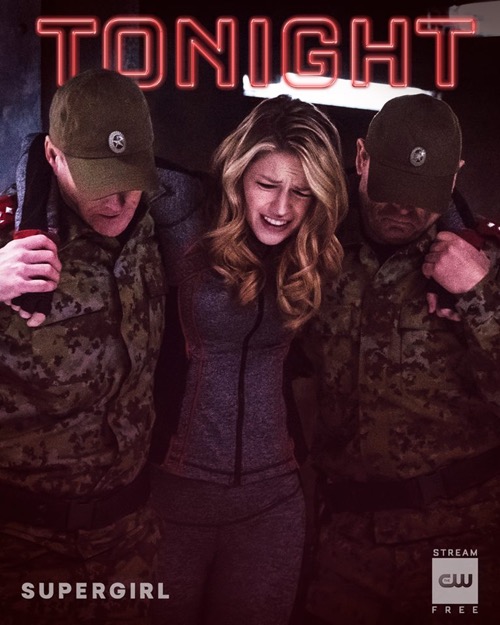 Tonight on the CW the series Supergirl airs with an all-new Sunday, March 24, 2019, season 4 episode 16 and we have your Supergirl recap below. On tonight’s episode called, “The House of L” as per the CW synopsis, “In the wake of Lex Luthor’s return: A flashback to what he’s been doing for the last two years and how his secret machinations and plans have affected Supergirl and Lena.”

In the air in a helicopter, Supergirl sees Lex as he tries to make his escape from Lena’s. She knocks the copter out of the sky. Lex lands on a rooftop. He has powers.

Three Years Ago – Lena is in the stand in court discussing how Lex shut her out. Jimmy takes the stand, discussing how Lex kidnapped him. In his defense, Lex tells the jury Superman made him do it. He is protecting mankind from a supernatural event. The judge announces that he has been found guilty. She coughs as she reads the verdict. She passes out. The rest of the room also begins to cough, dropping like flies. Lex is carried out of court, shackled.

In prison, Eve visits Lex. She is a fan. Lex asks her to help him by getting close to Jimmy and his circle.

Six Months Ago – The warden pays Lex a visit in his cell. He has a call from a Russian embassy. The caller tells him about Supergirl and her powers, telling Lex to come quick. Lex tells the warden he needs to leave for 72 hours. The warden laughs unless Lex threatens his mother. He knows where she lives.

Lex arrives in Kaznia where he goes to see a scared looking Supergirl in a small cabin. Just hours easier, Supergirl was captured by Russian soldiers and placed in a chair. They look her over wondering if she is indeed Supergirl. She looks like her. They bring her out into the woods. She takes in the sun. One of the men tells her to listen. She uses her abilities. A gunshot rings in the distance. It spooks her. Her heat vision goes crazy. She burns several officers. Later, in her cell, she hears a Russian boy crying for help. She makes her way out and flies, listening for his whereabouts. She ends up in the cabin in an attempt to save the boy where Lex is brought to see her. She doesn’t know who he is.

The minister of defense tells Lex he would like to keep Supergirl. He can train her and make her a weapon for Kaznia. She calls him Alex.

Lex visits with Supergirl again. She speaks Russian as she asks him if he is mad at her. He brings her to a warehouse to show her what she is capable of. He tells her to speak in English.

Lex talks with Eve who informs him that Lena is working on the serum. They talk further about how Supergirl must have come in to contact with black kryptonite. Lex talks about how he can turn all of this in his favor with Russian and the US in dispute.

Supergirl reads books sent to her, finishing more than a dozen fast. Lex pays her a visit. They talk about what she has read, books all about great leaders and conquerors. They play chess. He gets angry when she admits The Great Gatsby in her favorite book because it is lush and beautiful. He wants her to appreciate that they were fools in the story and that someone always suffers especially when it comes to money and greed.

Outside, the sky is green. Supergirl is in pain as kryptonite dust falls from the sky. It is from the Americans Lex tells her. He brings her into a warehouse, safe from the outside and tells her the truth about her origin.

Lex tells her about Supergirl, her sister. She has taken her place. He decides to bring her to where her sister is.

Disguised, they arrive in the US and head to Metropolis. Lex tells her how Supergirl is soft and helps the Americans who take advantage of the Kaznia people. He brings her to Kara’s apartment where she looks around. Alex shows up. She pretends to be Kara while Lex hides in the bedroom. She tells Alex she forgot her journal. Grabs it and runs to Smallville. Outside, Lex tells her to go back to Kaznia. Lex needs to go back to prison. She doesn’t listen to him and instead goes through Kara’s apartment. She warms to her as she reads her journal and learns about Lena Luthor. She heads to the newspaper where she talks to Lena, pretending to be Kara. Eve finds her and tells her she needs to go back to Kaznia. She doesn’t want to. She had questions. Eve calls Lex and tells him. He isn’t worried, he knows how to reel her back. The boy she saved.

Supergirl’s Russian doppelgänger learns of an explosion. She arrives back to Kaznia where she arrives at the cabin to find a soccer ball and ash. Lex arrives as she kneels in the rubble. She finds evidence that the Americans have done this. She shoots angrily into the sky and heads there where she gets angry, ready to destroy. Lex is right behind her and talks her out of it. Meanwhile, the boy is safe with Otis, Lex’s driver.

Lex meets with Eve who tells him that the girl is dying, its Lena’s serum. It isn’t fool proof and safe from risk yet. Desperate, Lex decides he needs to give himself cancer. Lena will speed up her research and work on the serum to help him. He goes to Lena after affecting himself.

Lex is hooked up to his latest project. The girl lay in a hospital bed unconscious. She comes to after he saves her. He asks her to forgive him. She agrees to destroy Supergirl. Lex gives her a new suit. She heads to the US.