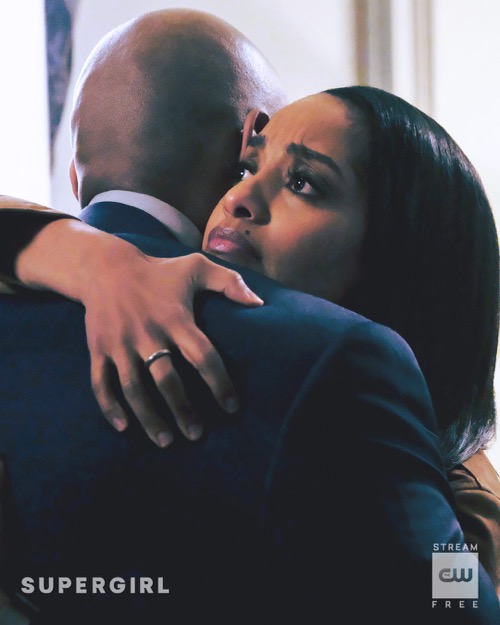 Tonight on the CW the series Supergirl airs with an all-new Sunday, March 31, 2019, season 4 episode 17 and we have your Supergirl recap below. On tonight’s episode called, “All About Eve” as per the CW synopsis, “Supergirl must deal with the destructive aftermath of Lex’s nefarious plans. Shocked at what Lex has created, Supergirl faces her biggest challenge yet.”

Alex and her team arrive at Lena’s office. They find her. She is alive and Lex has left a letter apologizing for stealing the research. Lena tries to come clean about something but Alex tells her not to talk.

In the sky, J’onn and Supergirl talk. She blames herself for Lex when J’onn decides to cast a psychic net. He passes out and falls to the ground. Supergirl rushes to him. The next day, J’onn thinks he has lost his powers because he is no longer a peaceful man. He thinks he should summon his father’s spirit for a council. Supergirl tells him to rest.

Jimmy talks to his sister. He is back to work and feeling fine he tells her until he has a spilled-second flashback.

Back at headquarters, Alex and the team are alerted to a perimeter breach. It’s Supergirl. She has brought donuts and the hope that they want to team up to find Lex. Haley thinks it over and tells Alex she and Supergirl can team up. Supergirl gives Brainy his ring back. He is thrilled.

J’onn is trying to meditate when his father knocks at the door surprising him. He cannot believe he is actually here. He hugs his dad and tells him how lost he has been. His father is only here to take back the Scared Symbols now that he has admitted he isn’t a peaceful man. J’onn tells him he cannot take them, they are in his mind. His father reaches out and grabs them off the table. J’onn falls to the ground.

Lean pays a visit to her mother in prison. Her mother reveals in Lena’s possible exposure to her friends when they find out she had been helping Lex.

Lockwood meets with a senator who tells him she isn’t going to vote to take alien rights away. He is angry and cannot believe this. Meanwhile, J’onn has come to. He and his father talk. J’onn doesn’t know who he is anymore. He needs help. His father tells him he can figure it out. J’onn reminds him that there is more on the line – the Martian religion and history. He father suggests a cup of tea.

Alex, Lena, and Supergirl pay a visit to Eve’s cousin. She is sweet and welcoming until they witness her take a cake out of the oven with her bare hands. Eve must have given her some of the serum. They knew she had cancer.

Jimmy’s sister tries to talk to him about his symptoms that are very similar to PTSD. He doesn’t want to talk about it.

J’onn and his father go back and forth over what J’onn has done. J’onn admits he has tried to be like his father but he cannot. He becomes angry, he isn’t a man of peace but he is doing what he knows is right. If he has to give up the symbols then so be it, he yells. His father rises from his chair, proud. He is a Martian Manhunter!

While digging through an office to learn more about Lex’s whereabouts when they find a gun, an alien comes in shooting. Alex, Lena, and Supergirl dig for cover when they see he has kryptonite. Lena comes to the rescue and throws the potion at him. They take his kryptonite heart back to the FBI. They talk with Brainy. They think Lockwood may have a connection to Lex and Eve. Supergirl wants to go talk with him.

J’onn and his father talk. His father is proud that he knows who he is now. J’onn thinks he knows a place he can bring the symbols and keep them safe. One day another worthy one will find them. They say goodbye with his father reminding him that this was all in J’onn’s mind – from his memories. All of the answers came within him.

Kara pays Jimmy a visit. The gun they found belongs to Eve and the bullets are the same from the one that almost killed Jimmy. It was Eve that shot him. The news comes on. Kara sees Eve on TV in disguise. She is in Washington.

Lena visits with her mother again. She has a blueprint of the prison that Lex had and he has marked her name with a red x. Lena tells her mother that Lex was looking for her to kill her not rescue her from prison. She must know something.

Jimmy arrives in Washington to see Lockwood. He confronts Lockwood, telling him he knows he has a connection to Lex. Meanwhile, Supergirl confronts Eve outside. She is attacked and trapped against a wall. Her doppelgänger wreaks havoc on the meeting with everyone thinking it is her.

The president holds a press conference where he declares Supergirl public enemy number one after the attack. Meanwhile, Jimmy goes to see his sister. He admits he was wrong and he needs help.