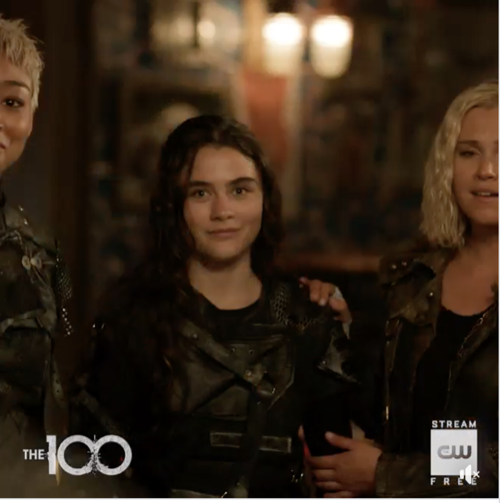 Tonight the CW series The 100  airs with a Tuesday, May 21, 2019 season 6 episode 4 and we have your The 100 recap below. On tonight’s episode called, “The Face Behind the Glass,” as per the CW synopsis, “CLARKE MAKES AMENDS – Clarke (Eliza Taylor) embraces the traditions of Sanctum and tries to make amends for her past actions.”

Sanctum – Charmaine is offered a deal to find Rose. If she can, they will raise her child in Sanctum. They give her a bike and a gun. She takes off on her mission.

Simone wants to cancel Naming Day with Rose missing but Russell is against this. They have already lost 3 primes, she reminds him.

Delilah and Jordan are talking. He feels guilty over having her now. He spent his life on a ship, he tells her. She thinks they need to focus on their happiness now and get it while they can, easing his guilt.

Delilah arrives at the Naming Day celebration where Clarke and the others are. The Sanctum’s doctor looks over Clarke’s wounds. She looks good and he is happy about that because he fears her mother. Maddy comes along. She notices the two flirting. Clarke brushes it off. Blythe Anne calls them for the opening ceremony. They all gather around.

Russell kicks off the ceremony and wants to make amends as their leader. He apologizes to one of his own, for failing to save her Josephine. The female hugs him back, accepting his apology. He tells the others in the crowd to make their own amends.

Clarke finds Raven and apologizes for all of it, for Shaw. Raven tells her to shut up. Because of Clarke, he was tortured and good people turned in. Meanwhile, Octavia is being brought through the woods with her hands tied as a hostage. They stop for a break and tie her to a tree with a little girl who is also a hostage. One of the men, Xavier, offers them food. She refuses.

Clarke works to tie a lantern as part of the celebration. The lanterns float, taking away their sins. She sees Bellamy. She approaches him and apologizes for leaving him. He understands. She tells him how important he is to her. They hug.

While the group of fighters debate, Octavia and the girl slip away. Their absences are noticed within minutes.

Raven wanders into a garage where she meets a man having bike problems. He’s not really into Naming Day and would rather be alone. She heads to the door but he stops her. He introduces himself as Ryker.

The party continues. Clarke finds herself in a club with lights and music. Everyone is dancing. The doctor gets her on the floor. Bellamy isn’t having a good time. The last time he was at a party his sister was arrested.

It’s dark. Octavia and the girl paused for a minute. The little girl Rose is tired and afraid. Octavia gives her a brief pep talk. They need to stay alive/ They run again. Gunfire erupts from the hill above. It’s Charmaine. She takes a few of them, Octavia finishes one of them off. When she turns, there is screaming. Rose has been shot. Angry, Octavia grabs a gun. She is going to kill the one who wasn’t with them. Charmaine tells her she will join her. She’s in.

Raven gets Ryker’s bike started. He tells her to clean up. He is headed to the palace and can get her on the list. Meanwhile, Clarke and her new love interest are spending some time alone.

At the palace, Ryker takes a spot on the altar next to Russell. Delilah approaches, ready to finalize her induction. She stops to kiss Jordan before she is taken behind a door.

Clarke hears the horns from the celebration. She dresses. She sees a picture on the desk, a drawing of her. Freaked out, she tries to run but is taken out with a dart that paralyzes her.

When Delilah comes out from behind the door she doesn’t recognize who Jordan is. Meanwhile, Clarke will be taken to the Children of Gabrielle. Several men come in and kill the doc before he can take her away.

Bellamy finds Echo. She talks about her past regrets and her mother. He kisses her. Meanwhile, Clarke is brought to Russell and Simone. They can get their baby girl back tonight. All they need to do is sacrifice Clarke. Still paralyzed, Russell apologizes to her. It won’t hurt. Simone encourages Russell, telling him this was all meant to be as he prepares to change her into Josephine, his daughter.

Later, Clarke wakes as Josephine. She says hello to her parents before looking at her new body in the mirror. She is thrilled.