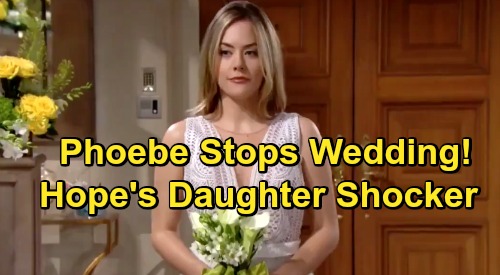 The Bold and the Beautiful spoilers tease that the wedding of Hope Logan (Annika Noelle) and Thomas Forrester (Matthew Atkinson) will have some twists and turns before vows are said and Carter Walton (Lawrence Saint-Victor) pronounces the couple to be husband and wife. Of course, there is a lot of opposition surrounding this wedding, and B&B viewers know that Hope is making a huge mistake, but that won’t stop the wedding from barreling forward.

It looks like there will be several hiccups on “Thope’s” wedding day, starting with Liam Spencer (Scott Clifton) deciding to attend. Thomas won’t be happy to see Liam show up, but there won’t be much he can do about it since B&B spoilers indicate that Liam isn’t going to budge. He’s vowed to be there to support Hope, and he’ll probably be hoping that his presence will get Hope to change her mind before she ultimately says “I Do.”

Then there will be chaos with Florence “Flo” Fulton (Katrina Bowden), who will have too much to drink before the ceremony and get loose-lipped about what she knows about Beth Spencer really being Phoebe Forrester (River Davidson and Madeline Valdez). She’ll blab to Zoe Buckingham (Kiara Barnes) that it’s not too late to tell what they know and stop the ceremony from happening.

But it seems that Zoe will manage to get a lid on Flo, and the wedding will indeed take place, although there will be some weird moments during the ceremony. According to B&B spoilers, Hope’s entrance will be delayed, possibly as Hope contemplates whether she really wants to become Mrs. Thomas Forrester when she’s clearly in love with Liam.

Hope’s delay will lead to an argument between Liam and Thomas, as guests (and viewers) wait and wonder whether they’re really going to see a wedding. We’ll have to wait to see exactly what delays Hope, but B&B spoilers indicate that she’ll eventually come around and make her big entrance, eventually joining Thomas at the altar.

And if all of this wasn’t enough, it seems that Thomas and Hope’s wedding vows will be suddenly interrupted…by baby Phoebe. Exactly how it all goes down remains to be seen, but it’s likely that Phoebe will cry or make a fuss right at the moment that Hope is saying her vows. In an ironic twist, the wedding will be interrupted by Hope’s own daughter, whom Thomas knows is really Beth!

The moment will be significant and meaningful for viewers, but it’s likely that Steffy Forrester (Jacqueline MacInnes Wood) will immediately rush Phoebe out of the premises and the wedding will almost certainly continue. B&B spoilers indicate that this wedding is going to barrel forward despite all of the bizarre goings-on that threaten to interrupt it.

One thing’s for sure – this wedding should be an interesting ride for viewers and there will be plenty of twists and turns along the way! Are you looking forward to watching Thomas and Hope tie the knot? Stay tuned to the CBS soap and don’t forget to check CDL often for the latest Bold and the Beautiful spoilers, updates, and news.