BY hellodrdavis on July 15, 2019 | Comments: 2 comments
Related : Soap Opera, Spoiler, Television, The Bold and the Beautiful 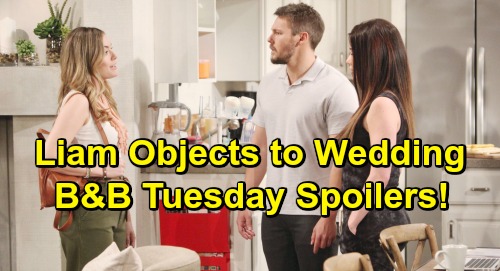 The Bold and the Beautiful spoilers for Tuesday, July 16, tease that Hope Logan (Annika Noelle) and Thomas Forrester (Matthew Atkinson) will have some big news to impart on their friends and family. Everyone knows by now that they are engaged to be married, but there’s a lot of opposition to their union. Most notably, Brooke Forrester (Katherine Kelly Lang) and Liam Spencer (Scott Clifton) are vehemently against the engagement.

But for both Brooke and Liam, there’s been one bright spot, and that’s that Hope and Thomas are just engaged at this point. Brooke and Liam have each voiced optimism that Hope might realize that marrying Thomas is a mistake and call off her engagement. Surely, Brooke and Liam are hoping that they can talk some sense into Hope during a very long engagement period.

But on Tuesday’s episode of B&B, Hope and Thomas will let everyone know that they plan to be married as soon as possible. Of course, this is all because Thomas tricked Hope into pushing up the wedding date by scaring his own son Douglas Forrester (Henry Joseph Samiri). Douglas clung to Hope after the fake ghost scare, and Hope “decided” that she needed to marry Thomas asap and become a real family with Douglas.

Of course, Brooke is going to be horrified to learn about the upcoming quick nuptials, and she’ll surely try to talk Hope out of the idea of marrying soon. But Hope will be determined to wed Thomas immediately, all for Douglas’ sake. And then Hope will have to let Liam know about her wedding plans as well, which according to B&B spoilers will be hard for Liam to take.

Meanwhile, on the new episode of B&B on Tuesday, July 16, Hope and Thomas will get about the business of planning their wedding ceremony. Of course, Thomas will likely be far more excited about the upcoming nuptials than Hope will be, but plans will have to be made since we’re going to see a wedding by the end of the week!

Look for some tense scenes as Brooke, Hope, and Thomas try to work together to discuss exactly how the ceremony and reception are going to go down. Arrangements will have to be made, and Carter Walton (Lawrence Saint-Victor) will need to be called to officiate the ceremony, and that will take some cooperation on everyone’s part.

Brooke, who is already unhappy about the prospect of Hope marrying Thomas, will of course have to spearhead all the planning as the mother of the bride. She won’t be amused by the whole thing, and this will likely cause more tension between herself and Ridge Forrester (Thorsten Kaye). Ridge will probably happily agree to do anything to support Thomas and Hope’s union and their ceremony, while Brooke grumbles all the way.

And then there will be Hope, who is clearly fraught with doubt about the wedding. Sure, she wants Douglas to have security and a complete family as soon as possible, but she’ll also quickly realize that a quick wedding means that Thomas is going to expect some intimacy sooner rather than later. Hope just isn’t ready to make love with Thomas yet, and so she’ll probably be worried about negotiating separate rooms for after the wedding.