The Bold and the Beautiful Spoilers: Brooke Exposes Taylor as Bill’s Shooter – Retaliates Over Beth Adoption Scam and Hope’s Pain?

BY Heather Hughes on August 12, 2019 | Comments: one comment
Related : Soap Opera, Spoiler, Television, The Bold and the Beautiful 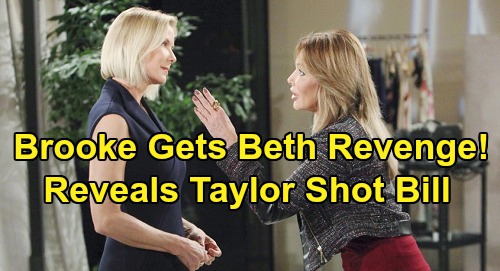 The Bold and the Beautiful (B&B) spoilers tease that Brooke Forrester (Katherine Kelly Lang) will remain overjoyed for Hope Forrester (Annika Noelle), who’s finally been reunited with her baby girl. However, that obviously doesn’t take away Brooke’s anger toward Reese Buckingham (Wayne Brady), Florence “Flo” Fulton (Katrina Bowden) and the other cover-up participants. Brooke wants the schemers to pay!

Of course, there’s someone else Brooke could be gunning for before long. After all, none of this would’ve been possible without the involvement of her longtime rival, Taylor Hayes (Hunter Tylo). If there was ever a time to reignite this rivalry, it’s right now! This isn’t really Taylor’s fault since she didn’t know the baby was stolen, but she still ignored red flags and made major mistakes.

Taylor vouched for Reese, but she didn’t know him that well. She also paid a ton of money for a ridiculously fast adoption, so everything about scenario this was shady. Without Taylor’s gullibility, Beth Spencer (River Davidson and Madeline Valdez) never would’ve become “Phoebe Forrester.” Reese deserves most of the blame here, but Taylor should face Brooke’s fury anyway.

B&B needs to revive their feud and perhaps spark a different story path. The Bold and the Beautiful has a chance to rev up the drama once again. Will Brooke retaliate by revealing the truth about Bill Spencer’s (Don Diamont) shooting? Will she expose Taylor as an attempted murderer and cause another round of chaos? Brooke could decide to take Taylor down once and for all by ratting her out.

It’s worth mentioning that Detective Alex Sanchez (Jeremy Ray Valdez) will be on hand soon. He’ll be doing plenty of investigating, so this buried case could be part of his latest stint. Brooke could easily stir up serious trouble for Taylor as revenge for Hope’s pain. Even if Hope advises against it, Brooke has a stubborn streak and is always going to do what she wants.